Four Regrettings and a Funeral

We'll really miss you, Mrs. K. (written one line only, and Bart is sad)

Radioactive Man and Fallout boy fly across the screen.

One more hour till milk expires- Thank you daylight saving!

Rachel Maddow, and Joe Namath as themselves.

Four Regrettings and a Funeral is the third episode of Season 25.

At the funeral of a beloved Springfielder, four residents remember events in their lives they would like to do over.

The story begins at the First Church of Springfield, where everyone is attending the funeral of Chip Davis (Springfield's most beloved character that never even appeared once in the series which the Simpsons fans never heard of). Hans Moleman and Bumblebee Man recall how Chip helped them with many of their problems. Then it was revealed that Chip had only a few regrets such as, never ascending Mount Springfield from the south face, and never being able to break par on hole 17 at the Springfield Mini Golf Course.

Patty then states that everyone has regrets. When Marge claims she has no regrets, Patty tells her that her marriage with Homer is, "a dead fish floating in a stale tank of beer, Maggie is addicted to pacifiers, and that Bart is out of control. After Bart pranks everyone at church, Marge recalls her pregnancy with Bart being perfect and then realizes that Bart may have been affected by the KISS music she was listening to every night. Kent Brockman is also having regrets about his career as a news reporter. Then Homer recalls the worst financial decision he's ever made.

In early 2001, Homer is at Alley McBalls, looking at bowling balls. He then makes a call to Bearsterns to sell all of his Apple stock to buy a blue colored bowling ball that reads, "SPARE NO ONE." After the flashback concludes, everyone in the church soon starts texting on their Apple tablets and phones. Homer then accuses the bowling ball of costing him all of the stock, causing the ball to cry. Mr. Burns reveals he bought the same stock Homer sold. Homer replies that someone as rich as Mr. Burns has no regrets at all. Mr. Burns reveals that he does have one, he looks at his pocket watch with the picture of a girl that got away and broke his first heart. After the funeral service, Bart and Milhouse steal Timothy Lovejoy's robes to prank everyone again. Both Bart and Milhouse soon fight each other with the collection baskets while Ned is trying to put money in them. A flashback shows Marge wanting to listen to the KISS record while Homer throws a number of parenting books into the fireplace. When the flashback finishes, the fight between Bart and Milhouse ends with Milhouse on top of a car that is being driven away.

Burns then tells Smithers a story from when he was much younger. He claims to have met a girl named Lyla who worked at a crepes stand in France. After drawing Lyla's portrait, Burns says he wanted to ask her something important. He searches through his pockets to find an engagement ring; instead however he pulls out a spider, a small skull, a monkey's paw, some kind of chemical, and a devil that flies out of a ring box. She says she would marry him, as long as he promises to set aside five minutes a day to think about others. Burns being too evil objects however. When the flashback is over he says all he has left of Lyla is his drawing. The drawing of her turns out to be a stick figure along with his drawings of Ernest Hemingway, Pablo Picasso, and Matador Juan Belmonte.

Kent Brockman soon reunites with his old Channel 6 co-host Rachel Maddow who is also at Chip's funeral. Rachel says the biggest mistake Kent ever made was not coming with her to become as successful as she did. Another flashback occurs, with a younger Maddow and Brockman interviewing Rainier Wolfcastle about his new movie 'Skull Crusher 4: The Concussioning.' While at dinner later the two discuss leaving their horrible jobs to become something better. Rachel believes she's found her ticket out of Springfield, or at least to a better Springfield. The duo reports a new case that someone (Krusty) is dumping used tires into a giant pile. Rachel chooses to leave for cable television, but Kent Brockman who is afraid to leave remains in Springfield. After she leaves, Krusty accidentally lights the tires on fire causing the Springfield Tire Fire that is still burning today.

Back in the present, Mr. Burns is trying to track down Lyla to see if she is still alive. He finds out she is alive and is now a Buddhist. Meanwhile, Kent Brockman has chosen to move to cable television, so he begins his career at Fox News. However he quickly changes his mind, because in Springfield he can report whatever he wants. Back in Springfield, Bart and Milhouse tie a bunch of balloons to a laundry basket for Bart to fly in. When Milhouse asks why they are doing this, Bart replies, "50% attention seeking, 50% to drop things on people." Homer is going to shine his bowling ball, when he finds the bowling store is being turned into an Apple store. Bart is stuck in this basket in the sky and is beginning to panic. He flies by the Rich Texan family reunion, where everyone is shooting their guns into the air. He also flies by a house where Smithers is standing outside angrily. Inside, Mr. Burns and Lyla are about to make love when Lyla suddenly passes away. Mr. Burns plans to honor Lyla's one wish by feeding the homeless. Kent Brockman sees Bart flying through the sky and reports it right away. Marge says she regrets listening to those Kiss albums while pregnant, but Chief Wiggum tells her such a belief is ridiculous. Telling her that his own wife listened to classic music and Winston Churchill speeches while pregnant, but Ralph can't even open a fridge. Chief Wiggum plans to shoot the balloons but Bart is saved by Homer's bowling ball shot out of a cannon. Marge finishes the episode by saying, "as long as your family is together, every choice you've ever made is the right one."

At the end of the episode, before the credits, a tribute to Marcia Wallace is shown, with Mrs. Krabappel in her classroom. She then says her catchphrase "Ha!" 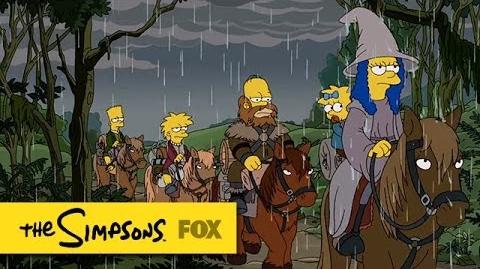 Retrieved from "https://simpsons.fandom.com/wiki/Four_Regrettings_and_a_Funeral?oldid=890027"
Community content is available under CC-BY-SA unless otherwise noted.