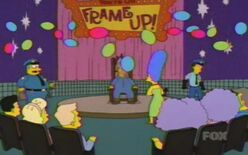 Frame Up is a reality TV show which airs on Fox and is produced in Springfield. The Man with the Braces is the host, and Carmen Electra was a guest co-host for at least one episode (the one in which Homer and Marge appeared).

The format of Frame Up seems to be as follows:

Frame Up has been criticized for the following reasons:

Homer and Marge were the participants: They were framed for murder and sentenced to die in the electric chair. The charges against Marge were later dropped and she was freed, leaving only Homer under a death sentence. At the appointed time, Homer was strapped into the chair, about to be executed. When the chair's switch was thrown, instead of Homer being electrocuted, a curtain was raised revealing a TV studio, the hosts, and the audience. Chief Wiggum voiced a protest about how much time the police and courts spent on what wasn't even a real case, and a relieved-but-disgusted Homer lectured Carmen Electra about toying with people's lives.

Retrieved from "https://simpsons.fandom.com/wiki/Frame_Up?oldid=908110"
Community content is available under CC-BY-SA unless otherwise noted.