Francine Rhenquist is a bully who was a new student at Springfield Elementary School.

Francine arrived at Springfield Elementary as a new student, and was initially believed to be very shy and withdrawn. However, upon Lisa attempting to befriend her, she unveils her true colors as a bully by socking Lisa in the eye. After several failed attempts by Lisa to befriend Francine, she became the subject of Lisa's science experiment on the motivations of bullies. The experiment revealed that bullies pick on nerds because of a pheromone they emit, which Lisa dubs "poindextrous." During Lisa's presentation, Francine was initially pacified by "bully repellent" (salad dressing), but then went on a nerd beating rampage at The Big Science Thing when Lisa discovers she has run out of repellent. Francine's parents (who helped with the caging for the experiment) assure the Simpsons that "she will punch herself out eventually."

Francine is heavyset, has curly red hair, and wears a purple bow in her hair. She mostly wears a white shirt over a blue dress, purple socks, and black Mary Janes. For swimming, she wears a magenta 2-piece swimsuit 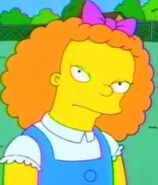 Francine wearing her gym clothes.
Add a photo to this gallery

Retrieved from "https://simpsons.fandom.com/wiki/Francine_Rhenquist?oldid=566171"
Community content is available under CC-BY-SA unless otherwise noted.