Frankenstein's Monster is a fictional monster created by Mary Shelly, he has appeared many times on the show, ether for a one off joke or a full on parody in Treehouse of Horror.

in Treehouse of Horror XX he appears in the opening when he and the other classic monsters are called "not cool" they get costumes, with him dressing as SpongeBob SquarePants, and they go to the Simpson Family's Halloween party after making out with Mrs. Muntz his wife shows up and beings to attack him, which causes Homer to get killed.

In Treehouse Of Horror II as a robot with Homer's brain accidentally put into it after Mr. Burns mistakes him for being dead, after realizing being disappointed that the monster is a lazy worker, and not the prefect worker as he expected, Mr. Burns returns Homer'a brain back to his body, only for the robotic body to fall over and badly injure Mr. Burns, causing Mr. Burns to implant his head onto Homer's body.

In Treehouse of Horror XIV Professor Frink is disappointed that his Father won't be able to see him finally get a award, due to him getting killed by a shark, so with the help of Lisa he revives his father as a Frinkenstien's monster, however he is displeased that he is mostly machine now, so he goes on a rampage stealing other people's body parts and attaching them to himself, but in the end he restores his mechanical parts to go to Frink's award ceremony, however he goes mad and beings stealing the brains of the people there trying to get unlimited knowledge, Professor Frink ends up defeating him and traps him in "The Soul Box". 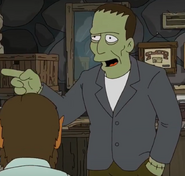 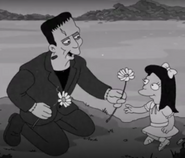 The monster in 101 Mitigations.
Português
Community content is available under CC-BY-SA unless otherwise noted.
Advertisement