“It's me! I can't help it! I just like squealing! It makes me feel big!”
―Frankie the Squealer

Frankie the Squealer is a married, low-level member of the Springfield Mafia and associate of Fat Tony. He is known, as his name suggests, for his indiscretion. He can't help squealing because it makes him feel big. His squealing was so uncontrollable that he even managed to rat out himself.

It is implied that he often ends up tortured specifically to shut him up for his indiscretion: While being beaten by Legs and Louie in an attempt to get him to shut up, he tells them Fat Tony's real name is Marion, so they resume the beating. The Springfield mob, incompetent as they are, continue to retain Frankie's services -- as he continues to be attacked, kidnapped, and poorly treated for his apparent continuing problem with keeping secrets.

Despite this, however, his uncontrollable urge to commit indiscretion has also aided the mafia as well -- as he informed Louie, Legs and Fat Tony of Homer's location while pursuing him (as revenge for ruining their mob summit).

He is similar to the character Jimmy the Snitch.

He seems to be shown dead in "Homer's Paternity Coot".

His ghost also is seen within "Flanders' Ladder".

Frankie the Squealer wears a blue-green suit, a purple button up shirt, and has gold jewelry around his neck. He has dark skin and long brown hair. 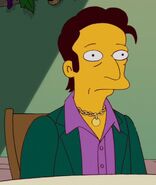 Is this Frankie the Squealer, at the bottom of the ocean, in Homer's Paternity Coot? 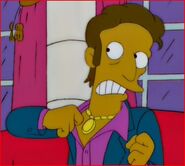 Retrieved from "https://simpsons.fandom.com/wiki/Frankie_the_Squealer?oldid=896491"
Community content is available under CC-BY-SA unless otherwise noted.