Freddy is a boy who is a student at Springfield Elementary School and is friends with Milhouse Van Houten.

He is first seen at school after class,[1] but doesn't speak until he is studying with Milhouse at the Springfield Public Library.[2] He sees his photo of Homer dancing with Princess Kashmir and asks him for it. Milhouse accepts and he gets a copy, but shows it to Mike, his father, who is disgusted at the photo, so Freddy apologizes. He later makes cameos.[3][4] Later, he is seen at Lisa's class.[5] After these appearances, he is seen in minimal cameos. 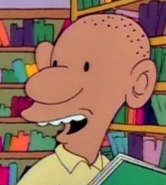 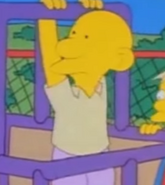 With yellow skin in "The Crepes of Wrath"

Seen in "I Love Lisa"

Retrieved from "https://simpsons.fandom.com/wiki/Freddy?oldid=845909"
Community content is available under CC-BY-SA unless otherwise noted.