Start a Wiki
watch 01:21
The Loop (TV)
Do you like this video?
The title of this article is conjectural. Though the topic is found within The Simpsons universe, a proper name is not available.

"Guess Who's Coming to Criticize Dinner?"

The French Chef was a chef who tried to kill Homer.

When all the restaurant owners got offended by Homer's reviews, they decided to kill him. Before he ruins their business, the French chef then shows them his plan: a chocolate éclair laced with poison. Bart then finds out about the plan and told Marge and Lisa. When Homer was about to eat it, Lisa manages to save him by telling Homer that it's low-fat. The French Chef is taken by Lou and Eddie, but he manages to escape. He is later seen making omelettes at a meeting.

The French Chef Accidentally putting the Antidote to the Éclair

The French Chef as he appeared in Grift of the Magi 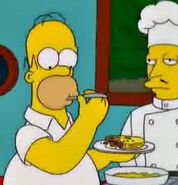 Retrieved from "https://simpsons.fandom.com/wiki/French_Chef?oldid=890793"
Community content is available under CC-BY-SA unless otherwise noted.