Hank Azaria
Kevin Michael Richardson
Buddha, along with Colonel Sanders, is often seen in heaven along with God. Lisa is a Buddhist. He also appeared in one of Homer's fantasies where Buddha is driving a stolen car being chased by the Police. He is also covered in tattoos. Also when Ned talks about going to heaven with Rodd and Todd, where Ned says "When you meet Jesus, remember to call him Mr. Christ." which Rodd responds "Will Buddha be there?", angering Ned.

Buddha with Jesus and SpongeBob in Heaven. 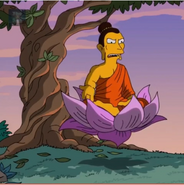 Buddha in Todd, Todd, Why Hast Thou Forsaken.
Add a photo to this gallery
Retrieved from "https://simpsons.fandom.com/wiki/Gautama_Buddha?oldid=927411"
Community content is available under CC-BY-SA unless otherwise noted.