Dan Castellaneta
Hank Azaria
George Washington was the first President of the United States and the enemy of Hans Sprungfeld, a.k.a. Jebediah Springfield. They shared a brief, but intense fist fight where Jebediah almost killed him and ruined a part of a portrait being done of him. George Washington was forced to use fake teeth to pinch Jebediah but stopped fighting after intervention by his wife, who was making a U.S.A. flag.

In Treehouse of Horror III a zombified George Washington can be seen walking around Springfield Elementary School. Homer kills him again with his shotgun.

In A Tale of Two Trumps, a picture of George Washington is seen in Donald Trump's bedroom. Trump said it came with the room.

At the end of Frinkcoin, Mister Burns has a dream about dancing with him. George says Burns' looks familiar and asks if he fought alongside him in "the war". Burns affirms he was in the war (the American Revolution) but that they weren't on the same side. 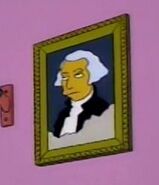 In Lisa's dreams
Community content is available under CC-BY-SA unless otherwise noted.
Advertisement