Gil Gunderson (usually referred to as Ol' Gil or just simply Gil) is an unsuccessful and unlucky businessman of Springfield. He has had a lot of failures and is almost an exact bum.

At the age of six, Gil was hired by his eight-year-old brother to run his sidewalk lemonade stand for the afternoon. By the end of the day, he had bankrupted his brother's business and drank up all the remaining inventory. since then, Gil has managed to hold down only one job for longer then a few days. He kept his job at Red Blazer Reality for over twenty years by selling his own house to himself several thousand times. Eventually, the house was destroyed in the Great Springfield Flood of '99, and with no other sales prospects, he was fired[2].

Gil has held many different jobs, usually involving sales, all of which he either eventually loses due to an inability to perform or make any sales, or quits because something bad happens to him (for example, being shot in his first day as a bank security guard).

Gil frequently refers to himself in the third person ("C'mon, help ol' Gil out here!"). He has a tendency to punch people violently in the arm while trying to tell a story. Gil has been married, as evidenced by his mentioning that his wife was going to leave him if he didn't start "bringing in the green". Later, when he telephoned his wife and overheard her carousing with his friend Fred, he didn't have the heart to stop her, and in fact cheerfully greeted Fred when he came to the phone.

He has several health problems, including bronchitis and a bad back. Homer thinks he is loser. He's also a strong moocher, and is adept at piano singalongs.[3]

Gill is commonly found in various jobs ranging from car salesman to real estate agent. He has encountered bad luck in all of these jobs.

Among the large number of jobs Gil has had is real estate agent. When Marge started working as a realtor, Lionel Hutz told her, "Welcome to the big league, Marge. There's over fifty years of experience right in this room! And forty-two of those years are Gil's!", which seemed to imply that before he ran into Marge, Gil actually kept professions.[4] He used to be a salesman, but he didn't sell any cars. He was almost going to sell one to Homer, but another salesman took his sale.[5] 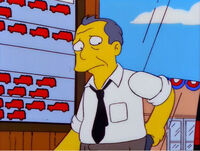 He has sometimes tried to be a lawyer, like when he assisted Marge with her anti-sugar campaign, one of his few successful jobs,[6] though it was not the same when Homer and Marge went to prison.[7] He once worked at the Kwik-E-Mart, but he slipped and hurt his leg.[8] He also tried to persuade Bart to let him be his manager when he joined a jazz band in Jazzy and the Pussycats, but was unsuccessful. He used to work at The Springfield Shopper, trying to sell newspaper subscriptions, but one of the customers on the phone told him to dance for it. Although that person couldn't see Gil, he danced anyway, desperate to sell something.[9] He tried pitching a product for Amway - a multi-level marketing company - during an AA meeting after supposedly losing three jobs in two days.[10] He was a "Coleco" computer salesman, asking the school to buy lots of computers to help "Ol' Gil"[11].

One of his most miserable jobs was one as a bank security guard, where he was shot several times by robbers just as he was entering the bank for his first day of work[12].

Gil got a job as a Mall Santa, where he brought a Malibu Stacy out of the back room stock for Lisa as a Christmas present, but it was for Mr. Costington's daughter, so he fired him. The Simpsons let him stay in their house for one night, but he brought all his stuff in and made it into an extended stay. He got on the entire family's nerves, but Marge found herself unable to kick him out because she could not say "no" to him. After an entire year, Gil finally moved to Scottsdale because he got a job as a real estate agent. Marge still had to say "no" to him, so the family went to Scottsdale to talk to him. There, they discovered Gil was actually successful at this job, as everyone acclaimed him. But when Marge finally confronted Gil and shouted at him because of his being so annoying, Gil's co-workers thought was a miserable man, so he was fired. He stayed in a hotel with the Simpsons after that[13].

Another of the few successful moments Gil has enjoyed is when he won a crossword contest, but only because he fooled Lisa by making her take his glasses, which he didn't actually need[14].

Gil has had several homes. He once lived at the Springfield Men's Mission (a hostel for down-and-outs) but was forced out of the premises because he had overstayed the "six month occupancy limit." A defiant Gil walked straight into a shady organ donation clinic to sell his eyes for cash.[15] Gil used to live in a hot-air balloon, which was stolen by Homer and Marge. Gil's lone possession in the balloon is a hot plate (on which he still had two more payments to make).[16] Gil has also been living in a storage locker.[17]

Gil nearly hit Snowball V in his car (just before Lisa adopted her), missing her and hitting a tree instead. Lisa saw the near-accident as a sign of good luck and decided to keep the cat, but Gil was left with a smashed-up and burning car. He still danced around celebrating, though, saying that thanks to insurance he'd be eating that night[19].

Gil has also been seen as a farmer in Treehouse of Horror XIII. He had a thiriving field of corn which would have yielded a bumper crop, but unfortunately, it was completely devoured by Homer's clones. The clones then ate Gil.

In the video game "The Simpsons: Hit and Run", Gil appears in all levels and characters can purchase cars from him, to "help Ol' Gil out".

Gil is based on Jack Lemmon's portrayal of Shelley Levene in the film version of Glengarry Glen Ross: a nervous, middle-aged man with the inability to hold a steady job due to strings of misfortunes that tend to hit him at the worst times.

Ol' Gil
Add a photo to this gallery

Retrieved from "https://simpsons.fandom.com/wiki/Gil_Gunderson?oldid=307083"
Community content is available under CC-BY-SA unless otherwise noted.