“I'm Gina. Touch my fence again, and your puberty's gonna be very boring.”
―Gina to Bart[src]

“Who is this nerd?”
―Gina to Bart referring to Lisa[src]

Gina Vendetti is a young girl and a former girlfriend of Bart who is in a juvenile prison for girls. She and Bart escape from juvie after going to a dance. She has anger issues, a seemingly permanent stern look on her face and some of her locks have purple hair dye and highlights.

Gina was sent to the Springfield Juvenile Correctional Facility for pushing Snow White off the parapet at Disneyland. Bart Simpson was sent to a boys' juvenile prison right next to the juvenile prison Gina is in, and is immediately attacked by Gina while hanging out near the fence on the girls' side. They later get partnered (and handcuffed) together for ballroom dancing, but Gina spotted a way to escape, and dragged Bart with her and he tried to called the guards to stop her. Bart and Gina at first hated each other but started to gain each other's trust and eventually kissed. Once freed from their handcuffs, Gina and Bart go separate ways, but Gina, having nowhere to go starts crying and reveals to Bart when he spots that she doesn't have a family to go to (whereas she previously told Bart she did have one) before attacking him in anger. The two started fighting and are captured by the police. Gina, not wanting Bart's life to be ruined because of her escape, confessed that the entire thing was her idea and Bart is released from prison although he still had time to do. Later, the Simpson family visited Gina in prison and they eat together and Gina asked Bart who is the nerd who's sitting next to her. She seems to still be in juvie hall, as shown in her cameo in Moonshine River, and is also shown to be angry at Bart, as are the rest of his previous love interests; when he visits her, she tells him to 'eat fist', calls him a jerk, and punches him in the face.

Gina kisses Bart, thus allowing Bart to go through with the escape.

Bart and Gina are now on the run.

Bart and Gina playfully pinch each other.

Despite getting the handcuffs off Gina is upset and crying over the fact she does not have a family to go to.

Bart holds Gina's hand as she is really surprised and happy that Bart came back to visit her in Juvie.

Gina asking Bart who is this nerd. 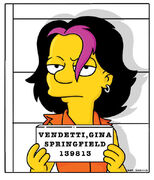