The girl with glasses is a girl in Bart's class who always wears thin glasses.

The character normally wears a green shirt, blue jacket, white skirt, white socks and black shoes. She also wears a pair of thin, usually green glasses, but they are sometimes white. She has bob-cut light blue hair, but are sometimes brown, red or other colors.

Being a background character, her appearance has not been fully finalized, so her hair color often changes dramatically between episodes.

Wearing her bathing suit in Bart of Darkness

At the gymnasium in The Ned-liest Catch

Seen with her glasses off. (She's in the seat behind Bart) in Bart Gets Famous

Playing a violin at school concert in Bart the Daredevil

Her debut in Simpsons Roasting on an Open Fire

In Bart's Friend Falls in Love 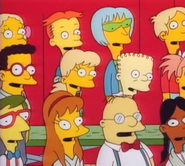 In The Principal and the Pauper

In The Boy Who Knew Too Much

In Blazed and Confused

In Treehouse of Horror V

In Treehouse of Horror VI 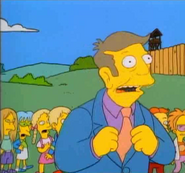 In The PTA Disbands 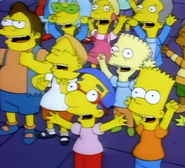 In The Secret War of Lisa Simpson 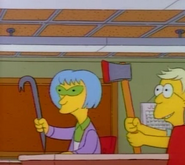 In Bart the Lover

In The Otto Show 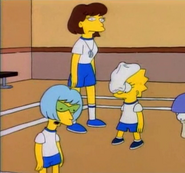 In Lisa on Ice

In Lisa on Ice
Community content is available under CC-BY-SA unless otherwise noted.
Advertisement