Simpsons Wiki
Register
Don't have an account?
Sign In
Advertisement
in: Vehicles, Tapped Out, Season 11 first appearances,
and 2 more

Gone Fission is a boat of Mr. Burns. Homer, while he was housesitting for Mr. Burns, proceeded to invite Moe's Tavern to a party in international waters on the Gone Fission yacht. The party was delayed by Marge due to not wanting Homer to be reckless, though they ultimately managed to make off with the boat, though they backed out the wrong manner before righting themselves. The ship was later hijacked by pirates. It had two entrances, which the barflies exploited after Marge blocked one of them. In The 7 Beer Itch, it appeared to have been rebuilt and expanded into a mega-yacht. 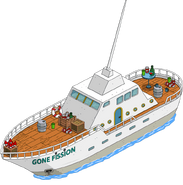 Tapped Out
Community content is available under CC-BY-SA unless otherwise noted.
Advertisement