Gorgeous Grampa is the fourteenth episode of Season 24.

The Couch Gag in Gorgeous Grampa is the 'Homer Shake' a parody of the Harlem Shake.

The episode follows the family's discovery that Grampa used to be a Gorgeous George style wrestler. Bart also wants to take up wrestling, but Homer disapproves.

After watching a TV show about storage vault auctions, Homer and the family visit one, and pay a ridiculously high amount for a worthless vault containing 'gay products' labelled as property of Grampa Simpson. After the family visit the Springfield Retirement Castle, attempting to persuade Grampa to find gay love, Grampa reveals that he was once known as "Gorgeous Godfrey," the most feared and vilified wrestler on the pro circuit, but adored by Mr. Burns who has a room full of Gorgeous Godfrey memorabilia. Monty and Abe break into the song: "Love to Loathe". Grampa returns to wrestling and teams with Bart in a tag-team match. When Bart starts to emulate some of his grandfather's villainous ways, Grampa reveals "Honest Abe," another wrestling identity, to set Bart straight and steady. Grampa officially retires from wrestling afterward. 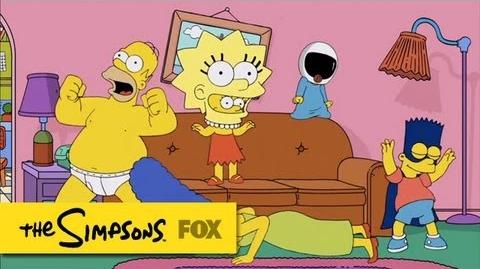 Retrieved from "https://simpsons.fandom.com/wiki/Gorgeous_Grampa?oldid=902210"
Community content is available under CC-BY-SA unless otherwise noted.