Simpsons Wiki
Register
Don't have an account?
Sign In
Advertisement
in: Characters with unknown gender, Living Characters, Characters,
and 11 more

Frank Welker
The Gremlin is a creature that tried to destroy the School Bus[1]. It resembles the gremlin from the Twilight Zone series.

It was voiced by Frank Welker who also did the voices of the gremlins Stripe and Mohawk from the Gremlins franchise.

Bart had a dream one night where the school bus lost a wheel and crashed. The next day, whilst on the bus, Bart finds a gremlin on the side. The Gremlin is attempting to destroy the bus by gouging the side and removing the bolts from the tires, so that they would fall off. Bart tries to tell everyone, but the Gremlin hid, and everyone else assumed Bart was crazy. Bart decided to take matters into his own hands by throwing a flare at the Gremlin. This knocked the Gremlin off the bus, where he was found by Ned Flanders. Flanders remarked "it's some kind of hideous monster... Aw, isn't that cute. He's trying to claw my eyes out."

Although he was proved to be right about the monster, Bart is still taken away in an ambulance to a mental asylum as a punishment for being disruptive. Later Bart assumes that everything is okay, but the Gremlin shows up at back of the ambulance's window holding Ned's severed head. 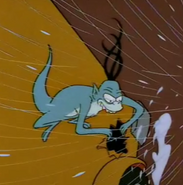