Homer was trapped in an elevator with Gretchen when she was heavily pregnant, he helped her give birth to her baby, by delivering it, to which she named Homer, Jr.. Homer soon started to help Gretchen, whose husband was away with the military, by raising Homer, Jr..

Lying on the floor 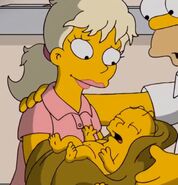 Holding Homer Jr. seconds after he was born.