Willie after losing his job

Willie recalling his past with Shary Bobbins

Willie with a tape

Willie with his girlfriend

"That colored chalk was forged by Lucifer himself!"

"Miracles are your department, Reverend!"

"If I wanted to see a man eat an orange, I would have taken the orange-eating class!"

"I'll kill that Mr. Burns, and wound that Mr. Smithers!"

Willie in a sweater

Willie after cleaning himself up

Willie on the show Rock Bottom

Another shot of Willie on Rock Bottom

Willie is deported back to Scotland

Willie at the police station

Willie drinking with a wolf after fighting it

Willie with other Scots

Willie playing basketball while his kilt briefly reveals his crotch, much to the shock of Homer, Skinner, and Moe

Willie in a cage

Willie sitting in his office

Willie getting axed in the back by an insane Homer

Willie slaps Edna to snap out it 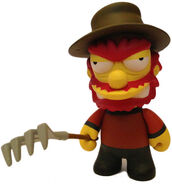 Willie scaring the kids with his bagpipes

Willie with Skinner and Carol Berrera

Add a photo to this gallery
Retrieved from "https://simpsons.fandom.com/wiki/Groundskeeper_Willie/Gallery?oldid=903561"
Community content is available under CC-BY-SA unless otherwise noted.