Hairy Shearers is a barber shop in Springfield. While Homer was trying to help others he sees the salon won't take Marge's coupon for hair streaks. Their hair stylist Henri said that streaking that much hair would make the salon go broke. He showed Homer the Profit Margins & Homer found out they were spending $400 a month on Loafer Lightener. They agreed to use mincing gel for same effect but cheaper from Homer’s suggestion & streaked Marge's hair.

Julio was shown to work there in The Blue and the Gray & this was later mentioned again in Homer Scissorhands. There are at least two locations in Springfield, with Julio being the barber in the other one.

Hairy Shearers recently appeared in The Simpsons: Tapped Out during the Pride 2017 mini-event as a premium building that comes with Julio.

The name of the shop is a pun of cast member Harry Shearer. 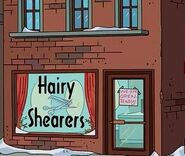 "The Blue and the Gray"
Add a photo to this gallery
Retrieved from "https://simpsons.fandom.com/wiki/Hairy_Shearers?oldid=913563"
Community content is available under CC-BY-SA unless otherwise noted.