Handsome Pete is a strange, diminutive character who plays the concertina, and whose face resembles a distorted Krusty the Clown.

When Bart is looking for Krusty, he blows up a balloon with Krusty's face on and asks the Sea Captain if he'd seen him. The Captain, on seeing the skewed image of Krusty on the balloon, mistook him for Pete.[1]

He was also seen on the Springfield Docks in "Kidney Trouble", and watching Russ Cargill's speech when the Dome was placed on Springfield.[2]. He was also seen in the angry mob that was after Homer for poisoning the lake, and trapping everybody in the dome. 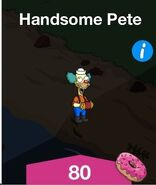 Handsome Pete in Tapped Out
Add a photo to this gallery

Retrieved from "https://simpsons.fandom.com/wiki/Handsome_Pete?oldid=863906"
Community content is available under CC-BY-SA unless otherwise noted.