Harper's father, Mike Jambowski, is extremely rich, which turned Harper into a selfish, mean, bossy and spoiled girl. She didn't let Lisa participate in any of the activities they've done together, although it's shown that she can be good sometimes. She buys Lisa a new, expensive bike, but Lisa refuses it, making Harper upset, since Lisa would "rather have (her) crappy bike". They discuss this and decide to end their friendship.

At Harper's private tropical island, they get into another fight when Harper turned a turtle on its back, making Lisa complain that she only "wants things her way instead of the right way." This makes Homer have to decide between Lisa's happiness or their good life at the island. He chooses her happiness and decides to go back home, saying that Harper "doesn't deserve Lisa".

A present for Lisa.

Another argument between Lisa and Harper. 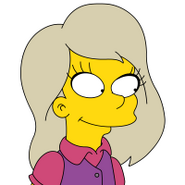 Retrieved from "https://simpsons.fandom.com/wiki/Harper_Jambowski?oldid=905710"
Community content is available under CC-BY-SA unless otherwise noted.