View source
watch 01:23
Who is Herbert Powell?
Do you like this video?
Play Sound

"Oh Brother, Where Art Thou?"

“This is America, and in America, you're never finished as long as you have a brain in your head, because all a man really needs is an idea.”
―Herbert Powell[src]

“Bart, Uncle Herb sounds so formal. Do you think you can call me "Unky Herb"?”
―Herb telling Bart to call him "Unky Herb".[src]

Herbert "Herb" Powell is Homer Simpson's seldom-seen long-lost older paternal half-brother. He was first mentioned by Abraham Simpson when Homer comes to his side after suffering a heart attack. Herbert is also the uncle of Bart, Lisa, and Maggie.

When Herb was introduced, he was a successful but very lonely man. When Herb found out Homer was his long-lost half-brother, he was overjoyed. Upon meeting his Simpsons family for the first time, he made sure they felt right at home. He was very welcoming, charming, and friendly when they arrived and got along great with Marge and the kids. His relationship with Homer started off great but went downhill after the car he designed ruined his company. However, after he gained wealth again after Homer lent him his money, he forgave him and was happy to call Homer his "brother", which was what both men had really wanted.

Herb is an intelligent, ambitious, charismatic, passionate, but also a lonesome person. Unlike his half-brother, he doesn't have a family to share his life with. Whereas Homer wishes he had Herb's wealth and lifestyle, Herb was envious of Homer for having a more complete life with a family. He learns how to love a family from meeting the Simpsons. However, he doesn't have his employees' total respect as he becomes very assertive when it comes to business, but he seems to be pretty optimistic that a man can make a huge success. He also hasn't seemed to inherit the Simpson Gene.

The product of a short-lived affair between Homer's father, Abraham Simpson, and Gaby, while Abraham was courting Homer's mother, Mona, Herb was adopted by Edward Powell and Mililani Osler. He put himself through Harvard by working odd jobs because his adoptive parents refused to pay for his admission (or may not have been able to afford his college tuition). He then founded Powell Motors, a car company based in Detroit. Herb was overjoyed to learn that he had a birth family and bonded with his nieces and nephew, and - in his role as CEO - allowed Homer to design a car. However, homer’s car was a failure and it bankrupted the company (now owned by Kumatsu Motors). Herb ended up becoming a street vagrant. He prefers to be called "Unky Herb" by Bart and Lisa because he thinks the term "uncle" is too formal.

He briefly settled in the Simpson household, despite his intense continuing antipathy toward Homer. Homer loaned Herb $2,000 (from the power plant, as compensation for making him sterile from radiation), which Herb used to build an invention that translated infantile speech into comprehensible English, based on observations he made of Maggie Simpson. He proceeded to mass-produce his new product and regained his fortune. He then proceeded to pay back the Simpson family the $2,000 but also bought Homer a vibrating chair, Marge a new washer and dryer set, Bart a life membership in the National Rifle Association, Lisa a monthly set of classic novels, and a promise that he will buy something nice for Maggie. Most of all, Herb ends his antipathy towards Homer and is happy to call him his brother once again.

While far smarter and more successful than most other male Simpsons as well as having a trim figure and full head of hair he still does exhibit signs of the "Simpson Gene", although much more hidden.

Herb does have cameo appearances such as when he appeared in a picture as Homer was listing off family members who needed to lose weight. Homer referred to him as "my seldom seen half-brother Herb". He considers wealth in terms of love and family, not money.[1] Danny DeVito voiced Herb again in "Changing of the Guardian", when he was heard briefly as a voicemail greeting. It is revealed that he lost his wealth again, although the circumstances behind this misfortune were not explained.[2]

Herbert Powell made his fame and fortune by making and designing cars at Powell Motors but lost it all after he met his long-lost half-brother Homer Simpson when he asked Homer to make a car of his choice. The car was called "blunder of the century," due to the car looking ridiculous and costing $82,000. This sent the company into bankruptcy and Herb to the street. Herb would regain his fame by inventing a baby-talk converter.

Herb's biological parents are Abraham Simpson and Gaby. Abe first met the attractive female dunk tank operator at a traveling carnival, where they were taken with each other. One year later, Abe saw the same woman again at the carnival to find out he had fathered an illegitimate son (Herb) with her. Unmarried and ashamed of himself, Abe and the woman took their infant son to the Shelbyville Orphanage, where he was later adopted by the Powell family. A year later, Abe married Mona and Abe told Mona about what happened at the carnival. When Homer was born, Mona told Abe to never tell Homer about the out-of-wedlock birth. However, Abe had a mild heart attack in his senior years and decided to tell Homer about Herb. If Abe's story about Virgil Simpson is true, then Herb is 1/32 Black.

Herb has a younger half-brother, Homer, and possibly an older half-sister, Abbie. Abbie could be the product of an affair Abe had during World War II. While Abbie is never explicitly called a Simpson, she looks and acts just like a female version of Homer.[3]

Herb lived at Shelbyville Orphanage. Herb was adopted by Mr. Edward Powell and Mrs. Mililani Osler [4]. Mililani also gave birth to Coco Powell, Wanda Powell, Carla Powell. Sometime before Herb met Homer, Edward and Mililani told Herb he was adopted, which upset Herb as it left him with no feeling of having a family.

Herb ends his antipathy towards Homer.

Herb during his plummet from wealth/with purple hair. 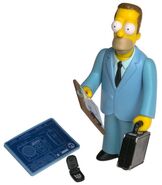 A newborn Herb with his mother, Gaby.

Mr. Burns bought the title of "Uncle" from Herb