“The key to Springfield was always Elm Street. The Greeks knew it. The Carthaginians knew it. Now you know it.”
―Herman[src]
“God closes a door, he opens a gunshop!”
―Herman[src]
“Looks like the spider caught himself a couple of flies!”
―Herman to Snake & Chief Wiggum[src]

Herman Hermann, voiced by Harry Shearer, is the owner of Herman's Military Antiques. He dresses in military fatigues.

Role in The Simpsons

Herman's not a very important and known person in Springfield, but he'll often participate in large mobs and crowds. He is shown to be an instigator, mainly because conflict at the roots of his military shop. Apparently, Herman bought one of Homer’s DJ pizza robots, which he later sold to a JJ Abrams film crew.[1]

In Homer Goes to Prep School, he appears as a member of the Preppers (People who believe society will end at any moment). He's also an insectivorian.[2]

Herman formerly had two arms. He told Bart that the other arm was lost by sticking it out of the window of a moving bus (hailing) and it was torn off by a truck driving in the other direction. It was also implied it was him, as Ms. Krabappel said not to do it because a kid once lost an arm that way, while on a bus.[3] However, in To Cur, with Love, it was revealed that he stuck it out on a street while trying to hail a car, resulting in the arm being torn off by a passing dogcatcher truck driven by Chief Wiggum[4]

He's a skilled military tactician, though his sanity's somewhat questionable (Bart considered him "a little nuts", while Abraham Simpson actually said he was "out of his mind"). Herman was instrumental in Bart’s victory in water balloon combat against Nelson, and the negotiation of the peace treaty between the two combatants.[5]

He's friends with Abraham Simpson, to whom he sold a hat, claiming it was previously owned by Napoleon. He also claimed that he owned "the hat McKinley was shot in".[6] He also has a mysterious friend called Zed, who presumably is the same Zed as in the movie Pulp Fiction; a homosexual rapist. Herman was a member of The Stonecutters, and possibly the "No Homers" club.[7] He was also a poker buddy of Homer Simpson.

He once sold counterfeit jeans out of the Simpsons' garage, and held Homer hostage when he stumbled upon his job. He was foiled by Marge Simpson, though he wasn't put in jail because the evidence was stolen by the Springfield PD.[8]

He once captured Chief Wiggum and Snake Jailbird and held them hostage. He also attempted to hold Kirk Van Houten hostage to silence him, but was thwarted (accidentally) by the latter's son Milhouse, wielding a flail.[9]

Harry Shearer does an impression of George H. W. Bush for Herman's voice. Herman's facial design is modeled after the show's most prolific writer John Swartzwelder, who created the character. The writers had originally planned for Herman to give a new explanation for how he lost his arm every time he appeared. However, the second joke, involving Herman having stuck his arm in a ball return at a bowling alley, got cut, and the writers never pursued the idea thereafter.

Note: The episodes where Herman has an actual role are in bold. 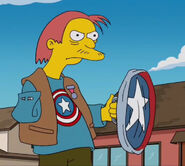