One of the most infamous running gags on The Simpsons is when Homer angrily strangles Bart after shouting "Why you little!"

Whenever Bart does something to anger Homer or nothing, Homer turns red and furiously shouts "Why you little!", grabs Bart by the neck, and angrily strangles him.

Based on real life, Matt Groening's father, Homer, spanked his butt (other than saying "Why you little!" then strangling) at a lot of times after he got into trouble when he was little. 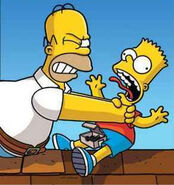 A Traditional "Why You Little!" Happening In A BBC2 Ident

Homer strangles Peter Griffin in the crossover "The Simpsons Guy", during the fight scene.

"Why you very little!" 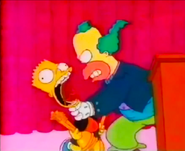 In a commercial for Bart vs The Juggernuats, Bartman Meets Radioactive Man, Bart's Nightmare and Krusty's Fun House

Add a photo to this gallery
Retrieved from "https://simpsons.fandom.com/wiki/Homer_Strangles_Bart_(or_Someone)?oldid=879833"
Community content is available under CC-BY-SA unless otherwise noted.