The Hover Car is owned and the trademarked hover car invented by Professor Frink. It is a playable vehicle in The Simpsons: Road Rage and The Simpsons: Hit and Run (though its appearance varies greatly between the two games). In the latter game, the Hover Car, equipped with a cloaking device, becomes increasingly translucent as it accelerates, eventually becoming totally invisible until it slows down or crashes.

It appears on the episode Love Is in the N2-O2-Ar-CO2-Ne-He-CH4, where Miss Hoover discovers Frink's location because he parked his hover car outside Moe's Tavern.

In Road Rage, Frink's Hover Car is available to be bought; it is one of the game's fastest vehicles. It is red with rocket boosters and has no roof.

In Hit and Run, it is a bonus car awarded after completing Level 5's Bonus Mission. That mission (titled "Kinky Frinky") involves one of Frink's prototype Hover Cars gaining self-awareness and subsequently going on a rampage; after Apu destroys it, Frink (depending on the level being played) allows himself to either drive the vehicle for or permit his Hover Car to be driven by the player's character. In Hit and Run, it is a vehicle with high top speed, acceleration, and handling statistics, but with low durability. In this game it is grey and alternates between turning invisible and visible.

The car parked outside Moe's Tavern.

The Hover Car as it appears in The Simpsons Road Rage. 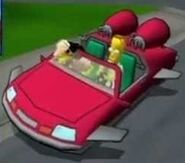