How the Test Was Won

"March Madness" is not an excuse for missing school.

A montage of old sitcom parodies, before the family finally sits on the couch.

"How The Test Was Won" is the eleventh episode of Season 20. It aired on March 1, 2009. The episode was written by Michael Price and directed by Lance Kramer.

A national achievement test has Springfield Elementary School in an uproar. Bart and the school's other underachievers are sent on a trip to Capital City so they don't bring down the school's score, while Lisa, rattled by her score of "only" 96 percent on a practice test, has trouble with the real thing. Meanwhile, Homer forgets to send in an insurance payment on time and has to prevent anybody from getting hurt in his house.

Bart accidentally receives a perfect score on a practice test for the upcoming Vice President's Assessment Test, by writing "Slurp My Snot" across his page. This enables him to attend a special pizza party, with a helicopter as his escort. However, it turns out to be a clever plan to purge the school of all bad test takers. Bart didn't receive a perfect score and the helicopter is disguised as the school bus, with Otto at the wheel. He, Nelson, Ralph, Kearney, Dolph, and Jimbo are driven to Capital City (with Bart as the only student knowing what's really going on), along with Principal Skinner, who was pushed on board the bus by Superintendent Chalmers.

On the way, Ralph stops for a bathroom break, and the bus is disassembled by a vandal (while Otto is still sitting in it). The group attempts to walk the rest of the way, but they lose Ralph on a garbage barge. Skinner signals for a piano cargo ship to rescue Ralph with its crane, but he accidentally stuns

the driver. Skinner rescues Ralph himself by jumping on board the crate hoisted by the 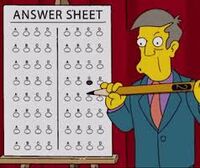 crane and using the law of conservation of angular momentum. He lands on the barge and the kids and Otto follow him. As it turns out, the garbage barge they have all landed on is headed towards Springfield Elementary.

The boys now believe that education is impressive due to Skinner's saving the day, and so Skinner reads The Adventures of Huckleberry Finn to the boys until they arrive, which they enjoy.

Meanwhile, Homer is late making an insurance payment, and won't be insured until 3:00 PM, so he can't hurt himself until then. Images of injuries flood his mind when he gets home, envisioning Marge's book club being killed by a series of freak accidents. Helen Lovejoy's hair being set on fire, her shoes stabbing Kookie Kwan in the eyes, and her falling back into a statue holding an axe which flies across the room and hits Agnes Skinner in the back. Marge runs around frantically exclaiming that they are liable, then begins making out with Lindsey Naegle, much to Homer's pleasure. Homer then snaps out of his imagination, exclaiming, "NOOO!!!" only to discover they are all still alive. He has to keep the entire book club safe while he is still uninsured, but ends up throwing a knife in Mr. Burns head at 3:01 as he randomly walks onto the Simpsons' property. Marge, however, is pleased to know what Homer can and can't do.

At school, Lisa is unable to focus on the test, as the thought of Bart being smarter torments her (also due to the fact that all of the test's answers have exactly the same meaning). When the test ends, she hasn't answered a single question. However, Skinner returns just in time to cancel the test and lift the school's ban on dancing, where they dance until the end of the episode.

The A.V. Club wrote: "I'm sorry, but 'How The Test Was Won' was about as low as things get these days—the worst of the season by far, and quite possibly one of the worst episodes I've watched in this brave 'new' era of yellow people."

Retrieved from "https://simpsons.fandom.com/wiki/How_the_Test_Was_Won?oldid=523938"
Community content is available under CC-BY-SA unless otherwise noted.