Hugh Jass was a customer at Moe's Tavern. His name happened to be the same as one that Bart made up to play a phone call prank on Moe.

Bart was playing one of his phone pranks on Moe, and made up the name "Hugh Jass" as a sound-a-like for "huge ass". The first part of the prank went according to plan, as Moe called out, "Somebody check the men's room for a Hugh Jass!" Unbeknownst to Bart, there really was someone named Hugh Jass in the bar. Bart was completely taken aback when Hugh answered the phone, asked who was calling, and (after Bart identified himself) pleasantly asked what he could do for Bart.

Bart decided to confess: "Uh, look, I'll level with you, Mister. This is a prank call that sort of backfired, and I'd like to bail out right now."

Hugh was a good sport about the call and said, "All right. Better luck next time." After he hung up the phone, he said, "What a nice young man," referring to Bart.

Hugh doesn't appear to be a regular in Moe's Tavern. It's likely he was one of the many people drawn to Moe's by the flaming drinks that Moe was serving while the bar was enjoying .Hugh's occupation isn't known, but from the way he was dressed it's probable that he has a white-collar job. He bears a slight resemblance to the Blue Haired Lawyer. A similar character was briefly seen in "Homer vs. the Eighteenth Amendment". In Tapped Out, Hugh has a wife named Lara. 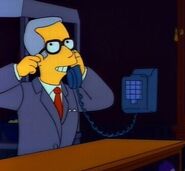 Hugh from Tapped Out