“Why me, Lord? Where have I gone wrong? I've always been nice to people. I don't drink or dance or swear. I've even kept Kosher just to be on the safe side. I've done everything the Bible says, even the stuff that contradicts the other stuff. What more could I do? I feel like I'm coming apart here. I want to yell out, but I just can't dang-diddily-do-dang, do-dang-diddily-darn do it.”
―Sounds of Ned's shaken faith

"Hurricane Neddy" is the eighth episode of Season 8.

After a hurricane blows through Springfield and only destroys the Flanders' home, Ned snaps after his friends and neighbors, including Homer, do their best to rebuild his house. Ned is checked into an asylum to discover the source of his sudden uncontrollable rage ever since his childhood.

Homer lazily enjoys his latest mid-afternoon nap outside, when the winds begin to pick up. Lisa consults her weather instruments and a question-and-answer book and finds out a hurricane will soon strike Springfield as she alerts Homer that a hurricane is coming. Panicked residents quickly gather supplies and food at the Kwik-E-Mart, but Ned remains calm as the main storm approaches, having fitted his home with a large tent like guard to keep it hunkered down.

As the bad weather hits, and various hurricane-related gags play out throughout Springfield, the Simpsons do their best at family bonding in the basement. Eventually, the storm finally passes, and everyone is overjoyed that the hurricane caused absolutely no damage to their home, or seemingly anyone else's home. However, next door to the Simpson house, the Flanders family has gone through serious trouble; Ned's house is the only one that has been totally destroyed as Ned and his family emerge from the rubble.

Ned is relieved that his family escaped serious injury, but that's of little solace since he doesn't have homeowner's insurance (having considered insurance "gambling") and all they have left are their tombstones. The Flanders family is forced to move into the church basement with Rod and Todd getting new clothes from the donation bin. There, he watches news accounts of the storm's aftermath, and is further discouraged when footage is shown of the Leftorium, cleaned out by looters after Maude tells Ned it has been a hard day for him, but the Leftorium will still be in business. Seeking answers from God, Maude and Rev. Lovejoy attempt to reassure Ned that matters will work out good. He tries to find solace in the Bible, but all he gets is a paper cut. He tries asking God directly why he is being punished when he is done everything the bible said (even the stuff that contradicts the other stuff) and also mentions that he has always been nice to people and he doesn't drink, dance or swear and even kept kosher. He thinks that he is coming apart and that he wants to yell out and that he can't do it, but doesn't get an answer.

The next day after the hurricane, in an attempt to show their community spirit and friendship, Marge commissions everyone in Springfield to rebuild the Flanders' home with Marge taking Ned and his family to the newly-rebuilt Flanders' house after Marge tells the Flanders family that they got to come back to their house and that something incredible has happened. Ned sarcastically asks if the rubble has burned down and Marge tells the family no and to come on as Ned becomes amazed that his house is now rebuilt. The job is completed in record time, and Ned is overjoyed - that is, until he inspects their workmanship, which turns out to be (at best) shoddy; for example, some of the floor is made of dirt as Moe remarks that they were out of tiled floor, so they painted the ground to make it look like tilewood floor; there is too much electricity in the living room; there are a lot of loose nails sticking out in the walls; the toilet is in the kitchen, to which Chief Wiggum tells Ned about the difficulty of lugging up a toilet up the stairs; the boys' bedroom has a crack in the wall with a Krusty the Clown poster, which Rod doesn't like and takes down, with Bart suggesting to not have the poster removed; the door to the main bedroom is too small as Ned thinks that there is something wrong with the hallway, and it's only the right size to accommodate a cat at best, and even Barney is able to fit in the main bedroom with the small door and Ned tells Homer that he has seen enough. After this, the two leave the house, and when Homer asks how much Ned likes the house that "love" built, the building promptly collapses. Overwhelmed and nervous, Ned tries to clean his glasses, but they break much to his dismay.

Ned puts his glasses back on and despite the best efforts of his neighbors and townspeople, is clearly at his wit's end. He desperately tries to calm himself down by reminding himself that the people did their best and that he has to be nice as hostility isn't the answer. As he speaks, however, his words start to become more and more slurred as he is unable to control his emotions. Finally, unable to control himself any longer something tragically and unexpected happens. Ned Flanders finally snaps and angrily screaming "AW HELL-DIDDILY-DING DONG CRAP! CAN'T YOU MORONS DO ANYTHING RIGHT?!" as he explodes into a fit of rage.

The entire crowd, gasps in shock. In the aftermath, certain members of the crowd try to speak out against him or catch his attention, prompting Ned to turn his wrath upon them:

Rant over, Ned storms off and drives away as the townspeople of Springfield stare at him, whispering to one another in shock, except for Homer, Chief Wiggum and Krusty.

Fearing he has lost his mind and on the verge of a mental breakdown, Ned checks himself into the Calmwood Mental Hospital to seek therapy for help. There, a nurse who is shocked he is there, calls his childhood counselor Dr. Foster, who reminds Ned that – because his beatnik parents didn't believe in discipline – he was a rambunctious, out-of-control child in need of psychiatric counseling. That therapy, called the University of Minnesota Spankalogical Protocol, involved eight months of continuous spanking. (There is a goof, however, since Dr. Foster says that the therapy happened around "30 years ago", but since Ned is now 60, he should have been around 30 at the time. Though likely that the writers and editors forgot that they made the "30 years" statement when they revealed Ned to be a 60 year old senior citizen.) Although it reformed Ned from his bratty behavior, it worked so well that it rendered him unable to express his anger at all and resulted in his trademark nonsensical jabbering at moments when he was particularly close to losing his temper. This caused Ned to unknowingly repress his anger, until it built up inside him and erupted in the form of his uncontrollable tirade of insults at the townspeople, including his neighbor, Homer.

Now having seen that his earlier therapy was inappropriate, Dr. Foster enlists Homer to help Ned learn to appropriately express his emotions, as Homer is the person who Flanders harbors the most resentful feelings towards just as much as Homer hates Ned. Homer arrives at Calmwood and Foster begins the therapy with several pre-written cards he wrote. 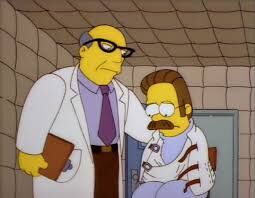 After several flubbed tries Homer makes that results in failure and Ned retaining his nonsensical speech, a doctor assisting Foster suggests he try a new and unorthodox way to get Flanders to open up to his anger by letting Homer use his own approach. Dr. Foster is against testing it and wants to continue using his cards. The doctor convinces him to let Homer use his own approach when he noticed its failure. He believes that Flanders won't make any progress with the pre-written scripted cards Foster wrote unless they let him try it and help trigger the real source of Ned's anger. Homer takes this to heart and tries his own approach by claiming Ned is afraid to be human because humans hate things, but he likes everything. He disagrees and admits to Homer that he doesn't like everything. Ned mentions that he has been frustrated over the post office's lack of customer services all the time and ends it with admitting that he hates his beatnik parents for the lack of discipline he got from them over the years resulting in them turning to someone else to do it for them. Suddenly, he feels like a weight has been lifted from his shoulders and Dr. Foster eventually declares him cured.

Shortly thereafter, the newly cured Ned is finally released from Calmwood and the townspeople of Springfield, including the other the Simpsons and Ned's family greet him again, and Ned tells everyone, including Homer, that he is all better now and will try harder at expressing his feelings and acknowledging when he is upset. He says in a jokingly-ominous tone that when he is positively hurt, he'll "run you down with my car" to be sure people hear about it. Feeling a new sense of camaraderie with Ned, Homer calls him crazy and the men laugh.