Ilsa is a character in The Simpsons. She appeared in the episode "Homer and Lisa Exchange Cross Words", and was against Lisa in a crossword puzzle. Her name was revealed when the Simpson family's shirts were rearranged (It was supposed to "Lisa" but it spelled "iLsa".) Ilsa's face lit up, as she thought that they were supporting her. Nothing is known about Ilsa, except that she might be of a Swiss heritage. [1] 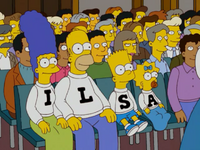 Retrieved from "https://simpsons.fandom.com/wiki/Ilsa?oldid=756702"
Community content is available under CC-BY-SA unless otherwise noted.