Jasper Beardly is a resident of the Springfield Retirement Castle, and is often seen around Springfield. He is Abe Simpson's best friend.

Jasper is a World War II veteran. Jasper also tried to avoid the draft by disguising himself as a woman and staying in Springfield to play in the local women's baseball league, along with his friend Abe, who was also avoiding the war. He has been a substitute teacher who confiscated everything made of tin (according to Lisa) and got his beard caught in the pencil sharpener.[2] He also preceded Reverend Lovejoy as minister at the Simpsons' church in Springfield. Jasper's father was a legal immigrant from Ireland and his mother was an illegal Mexican immigrant, who was deported when Jasper was 11.

Jasper unsuccessfully auditioned for The Be Sharps by singing "Theme From A Summer Place".[3]

It is implied that Jasper is slowly going blind. This ailment was once cured by a laser fired by a house's security protection equipment, but he was blinded again almost immediately. He accepted this very quickly: "Oh, well. Easy come, easy go." Despite the sight problem, Jasper is a light sleeper, and is still quick with his reflexes. When Abe Simpson tried to steal his dentures one night, Jasper turned on the light immediately and, with a gun aimed at Abe, foiled the nocturnal theft. Also, when everyone comes to watch the Itchy & Scratchy episode "The Beagle Has Landed", he looks down to Bart and asks "Hey, little girl, is this seat taken?", Bart replies angrily with "I'm not a little girl!! Are you blind?!", in which Jasper replies sadly with "Yes."

Jasper was put in crude "suspended animation" in the Kwik-E-Mart's freezer, and under advice from Dr. Nick Riviera, Apu kept him frozen. When Jasper's frozen form became popular with customers, Apu started exploiting the spectacle, and transformed the Kwik-E-Mart into a special interest store dealing with weird items, or perfectly ordinary ones which had been made out to be abnormal (for example, a cash machine that dispenses pictures of "dead presidents"). He put a Viking helmet on Jasper (or "Frostillicus," as Apu renamed him), but when Jasper was accidentally brought back alive, unfrozen, and stepped out into what he thought was a future world, Apu's dreams of wealth were once again crushed. Apu was considering on selling him to The Rich Texan. Jasper has unfortunate events like Hans Moleman because he has had many accidents.

Jasper was shot in his artificial leg by Waylon Smithers, on the same night of the nearly fatal shooting of Mr. Burns. He also claimed to have "broke" his beard during a Death Race accident with Abe Simpson and Old Jewish Man, and even managed to get his beard stuck in a pencil sharpener while substituting for the striking teachers of Springfield Elementary. He also mentioned that he is diabetic in, and was shot in the arm.[4] One time, Jasper, under the mistaken belief that it was Wednesday, took some of his Wednesday pills until he learned it was actually Friday, which caused him to morph into a similar creature to the Lorax from the Dr. Seuss stories.[5]

In a montage in The Old Man and the "C" Student, Jasper is shown to have a fake left leg while sparring with Old Jewish Man. Smithers also shot Jasper in the wooden leg while in a drunken stupor. However, in the episode where he substituted for Lisa's class, he was wearing sandals and clearly had both feet.

Jasper once broke his beard during a deathrace

Jasper is a friend of fellow resident Abe Simpson, but not always. When Abe's girlfriend Bea died, Jasper told him what had happened and comforted him. However, Jasper possibly bullies Abe regularly - on one occasion, he steals Abe's newspaper because he wants to do the crossword puzzle. He had a wife, Estelle, who is now deceased. He apparently had her cremated, and had his successor, Reverend Lovejoy, proceed with the cremation ceremony, although it later became apparent that the ceremony was invalid as it took place during the three months that Lovejoy's ministering license expired.[6]

Jasper Beardly was seen to be frozen in the fridge in the upcoming LEGO Kwik-E-Mart set.

Jasper with his possible son and granddaughter 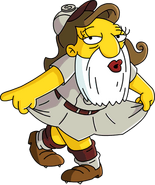 Jasper and Old Jewish Man battles their canes like swords.
Add a photo to this gallery

Retrieved from "https://simpsons.fandom.com/wiki/Jasper_Beardsley?oldid=678310"
Community content is available under CC-BY-SA unless otherwise noted.