This article is about the guest star. For the character, see Jay Leno (character).

The Last Temptation of Krust

Jay Leno is an American comedian, actor, writer, producer, and chat show host. On The Simpsons, he guest starred as himself in "The Last Temptation of Krust" and "To Courier with Love". He booked Krusty the Clown for his comedy show to which Krusty failed to get a laugh. He also made a cameo appearance at the end of "Judge Me Tender" making a joke about the BP oil rig, but he didn't voice himself. 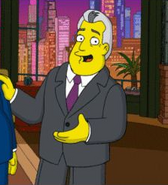