“You want fries with that?”
―Jeremy Freedman[src]

Jeremy Freedman, more commonly known as Squeaky-Voiced Teen, Pimple-faced teen, Puberty Boy, Geeky Teenager, Steve, Pop, Mr. Peterson and Old Man Peterson, is one of the few teenagers in Springfield and is perpetually trapped in a series of dead-end jobs. Jeremy has acne and his voice is in the process of breaking.

He is often seen working in a Krusty Burger and has also worked for the Grocery Store and the Aztec Theater. He was once an employee at the Mom & Pop Hardware store to try and get with "Mom", him being "Pop". He also worked at Barney's Bowlarama, where it was revealed that his mother was Lunch Lady Doris [2]. He was also employed at Book Returns[3] and Moe's Express. A rudimentary version of the character was employed at the Springfield public access television station (see "Homer Badman" episode).

He was in a managerial position at a shoe store, employing Jimbo, Dolph and Kearney.

Furthermore, he worked at a Mexican restaurant called The Brown Burrito, in which he wore a name tag bearing the name Steve[4].

He once tried to commit suicide by jumping off a cliff, because FOX cancelled Futurama. He landed in a car, in which two teens were making out, crushing one of them. The attractive girl, shocked he crushed her boyfriend, assumed he must be awesomely good at love-making and immediately proceeded to make out with him.

He was also in a relationship with Mom, an employee at the Mom & Pop Hardware store.

When Lindsey Naegle once suggested they "kill every child... friendly thing in town", he lost his squeaky voice to "become a man".

Little is known about Jeremy's family, and it is very rarely ever discussed in episodes. However, we know that his mother is Doris Freedman, who has disowned him.

Seymour Skinner refers to the character as "Jeremy" in a deleted scene on The Complete Fifth Season DVD. In an episode where the bullies Jimbo, Dolph and Kearney work at a shoe store, they refer to him as Mr. Freedman.

In Lisa vs. Malibu Stacy, Abraham Simpson refers to him as "Mr. Peterson", Peterson being his mom's maiden name.

Jeremy appears briefly in The Simpsons Ride, a theme park attraction in Universal Studios Hollywood and Orlando. He complains that the audience needs to keep quiet while he studies for a math test and aims to get a C. In the episode : "Beware My Cheating Bart" he has a nameplate that shows his name is Steve.

Jeremy with his girlfriend, Beatrice. 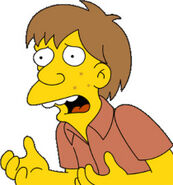 Jeremy is mixing his tip into Homer's yogurt.

Jeremy in The Simpsons Road Rage