“You want fries with that?”
―Jeremy Freedman[src]

Jeremy Freedman, more commonly known as Squeaky-Voiced Teen, Pimple-faced teen, Pop, and Old Man Peterson, is one of the few teenagers in Springfield and is perpetually trapped in a series of dead-end jobs. Jeremy has acne and his voice is in the process of breaking.

He is often seen working in a Krusty Burger and has also worked for the Grocery Store and the Aztec Theater. He was once an employee at the Mom & Pop Hardware store to try and get with "Mom", him being "Pop". He also worked at Barney's Bowlarama, where it was revealed that his mother was Lunch Lady Doris [2]. He was also employed at Book Returns[3] and Moe's Express. A rudimentary version of the character was employed at the Springfield public access television station (see "Homer Badman" episode).

He was in a managerial position at a shoe store, employing Jimbo, Dolph and Kearney.

He once tried to commit suicide by jumping off a cliff, because FOX cancelled Futurama. He landed in a car, in which two teens were making out, crushing one of them. The attractive girl, shocked he crushed her boyfriend, assumed he must be awesomely good at love-making and immediately proceeded to make out with him.

He was also in a relationship with Mom, an employee at the Mom & Pop Hardware store.

When Lindsey Naegle once suggested they "kill every child... friendly thing in town", he lost his squeaky voice to "become a man".

His mother is Doris Peterson, who has disowned him.

Seymour Skinner refers to the character as "Jeremy" in a deleted scene on The Complete Fifth Season DVD. In an episode where the bullies Jimbo, Dolph and Kearney work at a shoe store, they refer to him as Mr. Freedman.

In Lisa vs. Malibu Stacy, Abraham Simpson refers to him as "Mr. Peterson".

Jeremy appears briefly in The Simpsons Ride, a theme park attraction in Universal Studios Hollywood and Orlando. He complains that the audience needs to keep quiet while he studies for a math test and aims to get a C.

Jeremy with his girlfriend 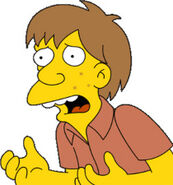 Jeremy is mixing his tip into Homer's yogurt.

Retrieved from "https://simpsons.fandom.com/wiki/Jeremy_Freedman?oldid=521885"
Community content is available under CC-BY-SA unless otherwise noted.