“Marge, since you’re by yourself, would you like to borrow one of my twins?”
―Jerri Mackleberry[src]

Jerri Mackleberry[2][3] is the mother of the twins Sherri and Terri, and the twins Larry and Jerry. She looks very similar to them, but she wears glasses. Her appearance in the 1991 Butterfinger Ice Cream Bars commercial is different from that in the series as she does not wear glasses and has her hair styled in a similar fashion to that of her daughters. She has one voiced appearance in "The Daughter Also Rises," where she is voiced by Pamela Hayden. She is whiter and less yellow than her daughters.

Jerri appeared in the 1991 Butterfinger Ice Cream Bars commercial before she was officially introduced to the series.

Sherri and Terri's Mother with her husband.

Hugging one of her daughters. 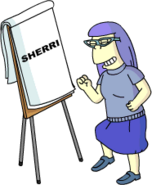 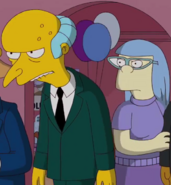 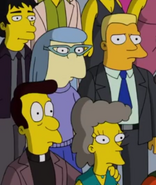 On a cruise with her husband. 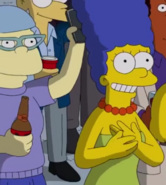 Jerri with her sons

Jerri with her husband

With Her Husband in Dark Knight Court

Dark Knight Court
Add a photo to this gallery

Retrieved from "https://simpsons.fandom.com/wiki/Jerri_Mackleberry?oldid=948353"
Community content is available under CC-BY-SA unless otherwise noted.