Brown (Blond as a baby)

Hank Azaria
Dan Castellaneta
Jesus Christ (of Nazareth) is the son of God and Mary.

God told Homer about the time Jesus was on earth and said "I don't know what you people did to Him, but He's never been the same." God then pointed to Jesus, who was sitting on a slightly spinning swing with a look of grief on His face. He seemed traumatized and depressed.[1] When Homer and Bart became Catholic, Marge dreamt of Catholic heaven where everyone was cheering and throwing Jesus in the air. He was in Ned Flanders' vision telling him to kill everyone as Ned hallucinated from toxic fumes.[2] Jesus turned water into a bloody mary drink for Rodney Dangerfield in the super V.I.P. section of heaven. [3]

Jesus Christ is the central figure of Christianity. In approximately the year 30 AD he was crucified. Christians believe he was resurrected three days later. 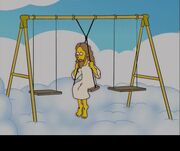