View source
watch 02:24
Wiki Targeted (Entertainment)
Do you like this video?
Play Sound

Blonde in "The Fool Monty"

“No, ultrasuede is a miracle. This is just good timing.”
―John Line Saving Homer and Bart's life

John is the owner of Cockamamie's Collectibles Shop, an offbeat store filled with various "camp" items.

John is gay and is basically an exact replica of his voice actor, both in design and personality. He's personable, friendly, playfully snarky, charming, festive and, of course, attracted to men.

He first appeared when he shows that "a very old figurine" belonging to the Simpson family was just an old liquor bottle, quickly striking up a friendship with the family. While exploring the Simpsons house searching for any value in the items there, Homer takes a shine to him. However, upon hearing that John is a homosexual, Homer turns against him. The rest of the family continue to enjoy John's company, with him taking them on a tour of Springfield. After a while, Homer fears that John's homosexuality is rubbing off on Bart and decides to take him hunting. After Homer has sustained a severe beating from a group of reindeer, John saves him, scaring the reindeer off with a Japanese robot Santa Claus. With this act, he earns Homer's trust. He is seen wearing Homer's "Pin Pals" bowling shirt, which Marge Simpson presumably donated to. It is hinted that John has been dating Waylon Smithers since both John and Smithers are gay.[1] Apparently, he also lied about having a sick mother in order to go out with the Simpson family, which Smithers discovered and got angry at John, with John jokingly stating that Smithers will not leave him. He is also rather personable and level-headed, never taking Homer's harsh criticism of his sexuality to heart.

In the episode Homer's Phobia, John is voiced by and modeled after John Waters. His character is seen wearing Homer's "Pin Pals" shirt from "Team Homer", donated by Marge. The character also had John Waters' trademark mustache, although it was altered to look wavy due to inherent difficulties in designing the mustache to look accurate to reality in his design due to it resembling a line.

Oddly enough, a deleted scene for the episode found on the DVD "Potty Time" indicated that John was straight, or at the very least bisexual, as he ended up marrying Lureen at the Kwik-E-Mart, with Homer helping in setting them up to be married via a wedding minister (who would have been played by Alec Baldwin).

John in an angry mob. 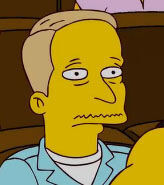 John as he appears in 'The Fool Monty' with blonde hair.