“Tell him to suck a lemon.”
―Johnny's quote

“YOU are a hybrid; Half idiot, half moron.”
―Johnny, to Louie after the latter asked to try out a car hybrid at the Lexus dealership

Johnny Tightlips, also known by his legal name, Jonathan Schmallippe,[1] (Born Giovanni Silencio[2]) is a frequently appearing mobster and an associate of his old boss Fat Tony, as well as his current boss, Fit-Fat Tony.

Johnny is presumably in his 30s, and he works for the D'Amico Crime Family.

He has a grandmother (Who he affectionately calls "Granny") and mother. Although in "Poppa's Got a Brand New Badge,” when Fat Tony asked Johnny how his mother is, he reticently exclaims and then says “Oo-whee, who says I have a mother?".

Even in his cameo appearance in "I'm Just a Girl Who Can't Say D'oh,” he is seen attending with his unnamed infant daughter, alongside Frankie the Squealer and his unnamed infant son, the same Daddy and Me class (A class for fathers and their babies) that Homer Simpson attended with Maggie Simpson, revealing that he and Frankie, like Fat Tony with Michael D'Amico, (As well as Legs and Louie with Calves and Louie Jr. respectively in the comics) are fathers as well.

Johnny has short black wavy hair that is receding, thick black eyebrows, shifty eyes, and wears a purple suit, a pale purple shirt with dark purple pinstripes, a light purple necktie, purple pants, and dark purple shoes. In "Insane Clown Poppy" and "Poppa's Got a Brand New Badge,” Johnny's skin color had a darker shade of yellow, then starting in Season 14, his skin is instead a normal yellow coloration. Also, the pinstripe linings on his shirt and even his eyebrows sometimes disappear and reappear in different shots in some episodes.

Johnny Tightlips first appears in "Insane Clown Poppy,” where he is at a mafia meeting. Later in the episode, he gets shot. When Louie asks him questions out of concern for him, he dodges them automatically.

His second appearance is in “Poppa's Got a Brand New Badge,” where he and his three other goons (Whom Fat Tony referred to as "[His] Joisey [Jersey] muscle.") go with Fat Tony, Legs, and Louie to the Simpsons’ house in an attempt to kill Homer out of revenge for his business, SpringShield, busting Fat Tony, Legs, and Louie for trying to illegally sell some ferrets disguised as toy poodles. They all get shot by Maggie, which they didn’t know, and then, offscreen, arrested by Chief Wiggum, who got his job as a police chief back after Homer decides to quit and end SpringShield due to him almost getting killed by the mafia for it.

The only time he ever got emotional was in "Moe Baby Blues" when he broke down crying along with Fat Tony's gang, the Castellaneta Family, and President of the Italian-American Anti-Defamation League upon being touched by Maggie's innocence that Moe Szyslak pointed out when the latter saved her from an "Italian-American-Mexican Standoff" at Luigi's by pointing out how her innocence changed his life before.

In "The Mook, the Chef, the Wife and Her Homer," he, while visiting an unconscious recuperating Fat Tony at the hospital after their rival mobsters, the Calabresis, shot him down with some non-fatal gunshot wounds, actually showed some concern for Fat Tony, admitting that if the Calabresis aren't taken care of, they will put the unconscious recuperating Fat Tony, who is going through a "Morphine mambo," in a "Dirt nap." He then later casually comforted Fat Tony’s son, Michael, by encouraging him to temporally take his father's place as the mafia’s don until Fat Tony is better. He then, a few seconds later, also, in bitter annoyance, described to Louie in his face that he is a "Hybrid; Half idiot, half moron.", when Louie asked about going to try out a new car hybrid at the Lexus dealership on the way back to the Legitimate Businessman's Social Club.

In "Waverly Hills 9-0-2-1-D'oh," it’s revealed that, upon learning from Wiggum that Batman will be at his son, Ralph Wiggum’s, birthday party, Johnny, along with Fat Tony, Legs, and Louie, is terrified of Batman, admitting that "[He] ain’t messing with no caped crusader!”, due to the fact that Batman would beat a villain up for a confession.

In their brief cameo in "Rednecks and Broomsticks," Frankie admitted that Johnny has a bad back while Johnny, Legs, and Louie were forcing Frankie to dig his own grave in the woods when Johnny suggested that he, himself, will dig Frankie's grave for him in a threatening way.

In "What to Expect When Bart's Expecting," upon finding out that Bart Simpson had helped successfully impregnated Fit-Fat Tony’s horse with an unborn male foal with Homer’s help within 24 hours upon the two's abduction by the mafia, despite Louie happily and cluelessly pointing out how happy Johnny is at the good news, he is, deep down, pleased with the rest of the mafia who happily responded to those good news, yet he was the only one who didn't actually smile on the outside.

Homer even mentioned to Dan Gillick, in order to "Convince" the latter to spare Johnny and the mafia members he was ordered to "Rub out" by Fit-Fat Tony, that Johnny digs wells while, at his spare times, vacationing in Darfur, indicating that Johnny, despite being a criminal mobster, also shows an altruistic side at times when it comes to charity work. (Although Dan had already asked Homer to stop him from killing Johnny and the other mobsters) ("Penny-Wiseguys")

Although very reticent and laconic, and at times altruistic, that doesn't mean he isn't treacherous, as Fit-Fat Tony learned the hard way when Johnny framed Fit-Fat Tony for pickpocketing wallets and set Fit-Fat Tony up into walking into a warehouse storing them, and what gave him the confidence to betray Fit-Fat Tony by framing him and becoming the new boss is taking some Paxil, which is also his confidence-boosting medication. But after Fit-Fat Tony cleared his name and exposed Johnny as the real wallet pickpocket with the police's help, Johnny was then arrested after he accidentally almost killed Homer by accidentally shooting him in his rear when Johnny meant to shoot Fit-Fat Tony. Afterwards, Johnny, for unknown reasons, ended up being reaccepted back as Fit-Fat Tony's capo again after being released from jail. (Probably because Fit-Fat Tony admitted earlier in the same episode that he trusts Johnny, and he, offscreen, probably decided, along with the other mafia members who also reaccepted Fit-Fat Tony as their boss again, to forgive Johnny for his actions against Fit-Fat Tony) (“The Fat Blue Line”)

In his cameo appearance in "Diary Queen," when Louie asked Fit-Fat Tony if he, Legs, and Johnny can kill Bart and Milhouse Van Houten upon spotting them seeing them dump Frankie’s body into the river, Fit-Fat Tony told them no because they don't kill nosy children unless they are 18 years old or over. Also just before that moment, Frankie shouts to his fellow mafia members that he isn't dead, resulting Johnny to pull his gun out and shoot at Frankie when Frankie attempted to swim away after shouting to the mafia members.

Johnny was even seen in one scene in "Uncut Femmes" watching and enjoying with Louie a beauty runway show on TV while Fit-Fat Tony watched over Ralph while Homer and Wiggum were searching for Marge Simpson and Sarah Wiggum.

Johnny and Louie were even hinted to possibly be pansexual in "Uncut Femmes," when they were both attracted to a gender-fluid person.

Laconic Johnny, at times, says very little, which spares him from accusations of being a "Squealer" (Being the only other suspect besides the more obvious Frankie the Squealer), but his reticence tends to be unhelpful to himself and/or others. When Homer and Krusty the Clown are caught by Fat Tony trying to steal several violin cases containing tommy guns (They were actually trying to take back a violin belonging to Krusty's daughter) during a mafia summit at his mansion, a shootout ensues and Johnny gets shot. When Louie asked him in concern where he is injured, he says, "I ain't sayin' nothin'!". When Louie asked in concern again on what he, himself, will tell the doctor, he says, "Tell him to suck a lemon."

In another case doing a shootout against Homer, who is supported by a mysterious sniper, (Secretly revealed to be Maggie saving Homer from the mafia's wrath) Fat Tony asks Johnny if he can see the said mysterious sniper, resulting Johnny to just say that "[He] see[s] a lotta things."

Even in "Moe Baby Blues," when Louie was worried about killing his mother because she makes good pasta sauce, Johnny points out that it comes from a can, resulting Louie to rebuke his worries by saying, "She's a corpse."

He also revealed to Louie that Fat Tony "[Has] got a thing for the Ya-Yas." when Louie complained to him in question about why they have to watch The Divine Secrets of the Ya-Ya Sisterhood on the mafia's private jet, easily indicating that Fat Tony likes that film and it moves him to tears literally. ("Mr. Spritz Goes to Washington")

He speaks occasionally in "22 For 30," even revealing he has his grandmother, whom he affectionately calls "Granny," when he sees his Black Lincoln Continental with a license plate number that reads "ZERO2SAY" being towed away from a no parking area with her inside it while he's at the La Coffee Nostra Cafe.

Johnny is a reference to Frank "Tight Lips" Gusenberg, who was shot down in the real life St. Valentine's Day Massacre in Chicago and repeatedly replied, "Nobody shot me.", before dying at a local Chicago hospital.

On the audio commentary for “Insane Clown Poppy,” it was discussed that the original name for him would be "Tightlips Johnny."

Johnny Tightlips armed with his gun 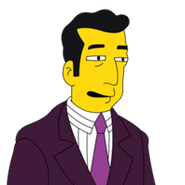 Johnny Tightlips in The Bonfire of the Manatees

Johnny Tightlips in Chief of Hearts

Louie: Johnny Tightlips, where did they hit ya? Johnny: I ain’t sayin' nothin'!

Louie: Then what will I tell the doctor? Johnny: Tell ‘im to suck a lemon.

Johnny: I ain’t sayin’ nothin’. Fat Tony: I understand. How is your mother? Johnny: Ooh-whee, who says I have a mother?

Fat Tony: Johnny Tightlips, can you see the shooter? Johnny: I see a lot of things.

Johnny Tightlips (From behind Maggie and Moe) finally crying with Fat Tony, Legs, and Louie by Maggie’s innocence touching them

Johnny Tightlips (From behind Maggie and Moe) crying with Fat Tony, Legs, and Louie by Maggie’s innocence touching them

Frankie: With your bad back? Forget about it!

Johnny: I ain’t messin’ with no caped crusader!

Johnny Tightlips in What to Expect When Bart's Expecting

Dan Gillick: Johnny Tightlips, give me one good reason why I shouldn’t shoot you.

Johnny: There’s a great one. But you’ll never get it outta me!

Johnny Tightlips and some mafia gangsters

Johnny Tightlips and his daughter

Johnny Tightlips and his daughter 2

Johnny Tightlips and his daughter attending a Daddy and Me Class

Johnny Tightlips in the movie

(After Louie’s line here) Johnny: The boss, he’s got a thing for the Ya-Yas.