Jonathan "John" Nerdelbaum Frink was the father of Professor Frink, with whom he never really got along well. Frink Jr.'s mother said they got along like positrons and anti-neutrinos.

After Frink Jr. wins the Nobel Prize (for devising a hammer with a screwdriver on the other end of it), he expresses the wish that his father was able to see him win. He explains that his father always saw him as a disappointment, and describes his father as a he-man scientist who worked on the atom bomb by day, slept with Marilyn Monroe by night, and sold secrets to the Russians at lunch. The last time He was seen alive before he went on a fishing trip. Frink Jr. didn't want to go on this trip because he gets sick ("clean but nauseous") taking a shower. His father, disgusted, left without him. Frink reveals that his father was bitten by a shark while he was testing a blood-based suntan lotion.

Frink brings his dad back to life, explains that his missing organs have been replaced with machines, and that he has no penis "in the traditional sense". Frink Sr., believing he isn't really alive, goes on an organ theft rampage, replacing parts of his own body with the stolen ones (despite his original parts being in many ways superior to the stolen ones, being a tall, strong and muscular man as opposed to Mr. Burns or Comic Book Guy whose arms and ass he stole respectively). Lisa convinces him to get rid of all the stolen organs and go to Stockholm, to see his son win the Nobel prize. After he finishes his speech, he walks around stealing peoples' brains which increasing his intelligence dramatically. Frink Jr. stops him by kicking him in the crotch. Soon Frink dies again, but Frink Jr. puts his soul in "the soul box".[2] 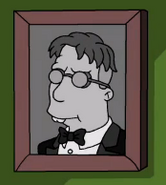 Retrieved from "https://simpsons.fandom.com/wiki/Jonathan_Frink_Sr.?oldid=758753"
Community content is available under CC-BY-SA unless otherwise noted.