Jub Jub is the only animal in the Bouvier family. Jub-Jub is Selma's pet iguana. He was originally owned by Aunt Gladys.

When Gladys passed away, she left Jub-Jub to her sister, Jackie (Selma, Patty, and Marge's mother, and Homer Simpson's mother-in-law) who was highly unattached to him and tried to stab him with a hat pin when Patty came to pick him up. Jub-Jub then ended up with Patty and Selma, and Selma adopted Jub-Jub after Selma realized that she could live without children (until adopting Ling Bouvier).

Selma once said that Jub-Jub will eat her remains upon her passing (probably a reference to an urban legend about Vivian Vance and her cats). Jub-Jub is always trying to eat dead things, and once almost ate Selma's foot, because it was asleep. Jub-Jub also likes roaches.

The name Jub-Jub was coined by then-writer Conan O'Brien. He often said nonsensical things around the office for no apparent reason, one of which was "Jub-Jub."

"Jub-Jub" may also be a reference to the poem "Jabberwocky" by Lewis Carroll, in which the narrator warns his son to "Beware the Jubjub bird."

In May of 2013, filmmaker J.J. Abrams appeared on the Conan talk show to promote his latest Star Trek movie. At Conan's request, Abrams promised to work a Jub-Jub Easter egg into the next Star Wars film, which he had recently been appointed to direct. 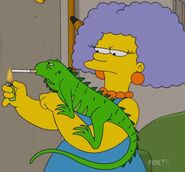 Jub-Jub sitting between Stampy and Princess.

Jub-jub the Iguana sees a Crocodile and a Gazelle in The Old Blue Mayor She Ain't What She Used to Be
Español Português
Community content is available under CC-BY-SA unless otherwise noted.
Advertisement