“The real world is for people who can't imagine anything better.”
―Juliet Hobbes[src]

Student at the Tuition Academy for girls

Juliet Hobbes is a girl who Lisa befriends in "Lisa the Drama Queen" [1].

Lisa first met her at the recreation center, during art class. The two quickly became good friends. Juliet and Lisa started a novel about a magical land called Equalia. The Simpson family later go to Juliet's house for dinner where they find that Juliet has issues with her parents.

Juliet decides to run away with Lisa to an abandoned restaurant shaped like a castle, in order to continue fantasizing about Equalia. It is there where they are caught by Jimbo, Dolph, and Kearney, who imprison them for trespassing in their hideout. After both her and Lisa entrance Kearney with their tales of Equalia, they manage to escape, while he tries to stop Jimbo and Dolph from burning their original manuscript.

Lisa decides to stop being Juliet's friend, due to her overactive imagination and Lisa wanting to live in the real world. Juliet then says goodbye to her then bikes off by herself. It is unknown what happened to her later on.

She wears a purple dress and glasses. 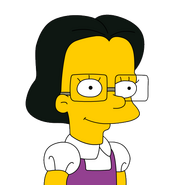 Juliet and Lisa singing to Josh Groban together.

Retrieved from "https://simpsons.fandom.com/wiki/Juliet_Hobbes?oldid=900807"
Community content is available under CC-BY-SA unless otherwise noted.