The "Just Stamp the Ticket Man" is the name given to a man who frequently appears to make sarcastic or angry remarks.

The man goes to the Leftorium to get his parking validated because it is the only store that does it without requiring a purchase. Ned Flanders says he is 'right as rain,' or, as we say around here, 'left as rain,' but the man bluntly responds, "Just stamp the ticket."[2] When the Squeaky-Voiced Teen tries to hand him a flyer he brushes him, saying, "Don't touch me."[3] He later tells Barney Gumble (who is handing out flyers dressed as a big baby) that he "sickens" him.[4] At the Springfield Swap Meet, he derides Marge's "cool" wishbone necklaces, stating he doubted his "son or daughter is that stupid".[5] He informs Homer he could have used the money he lost from not working to buy tickets to the Pigskin Classic football game from a scalper, rather than camping out for eight days to get to the front of the line.[6] The man tries to buy $2 worth of gas from the Kwik-E-Mart but is disgusted by Apu's overcharging.[7] He later punches a hippie singing "Sunshine on My Shoulders" during Springfield's heat wave,[8] and punches Homer in Springfield Mall when he approaches to suggest he looks "like a man who needs help satisfying his wife."

He later works as a Naval Recruiter. When Homer signs up for the Naval Reserve, he panics as Homer tries to answer the crossed out question "Are you a homosexual?", fearing he could lose his job.[9]

In "The Fat Blue Line", he makes a cameo appearance, now having brown hair and a green shirt again.

His appearance in the movie 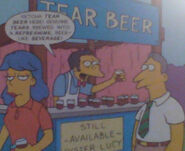