This article has been nominated to be a featured article!
Vote for it here.

Karl is the former assistant of Homer Simpson. He is perhaps one of Springfield's strangest residents, due to his strange obsession with Homer.

Karl is the mysterious guardian angel of Homer. Very little is known of his prior life, yet establishes himself very early as a confident mentor who seemingly dedicates himself to the growth of Homer’s abilities and confidence. Karl is one of the very few citizens of Springfield who emits such a powerful ‘purity’. However, beyond his life with Homer almost nothing is known, except that he lives alone. Karl truly is one of the most special people of Springfield; Karl’s strange fixation and die hard dedication creates an oddity of a person.

Karl is always seen dressed very well in suits of assorted colors and the occasional turtle neck and scarf. He speaks with a voice that is gravelly, yet soft. He has short[ish], blonde hair. However, in later episodes he is seen with white hair.[3]

Homer has recently been promoted to an executive. Frightened and well aware of his under-qualification, he anxiously interviews applicants for the secretary position. One woman's ‘resoomes’ seem in order, but her offer of a back rub makes Homer nervous and he quickly shoos her out. Marge calls Homer to see how things are going. He complains that every woman he interviews makes ‘kissy faces’, sparking Marge’s jealousy. Suddenly a shadow appears and Homer is saved, “Hello Mr. Simpsons. I'm Karl.” Marge is relieved by the male voice and urges Homer to hire him. Waylon Smithers, Jr. interrupts, informing Homer about an upcoming meeting and that all he is to do is keep his mouth shut. Karl quickly points out to Homer that he is clearly "a fraud" and doesn't "belong here". Frightened, Homer asks how he knew at which point Karl lists his obvious flaws but embarks on a campaign to improve him. Karl immediately improves Homer's self image with a rousing pep talk having Homer exclaim, "I am nature's greatest miracle!" He excitedly hires Karl, along with his requested three weeks vacation and moving expenses, who immediately takes him shopping.

Karl soon proves his abilities by redefining Homer’s image. Taken to a clothing store, Homer searches blindly. Karl acts as a backbone and does his best to make Homer feel like the ‘prince’ he should. Homer, now prepared for anything, goes to leave for work forgetting it is he and Marge’s anniversary. Homer quickly goes into apology act, as he would any other time. Yet Marge says she understands this year because Homer is now a busy executive. As Homer goes to leave, a singer jumps into the room and sings for Marge. Homer is surprised but Marge believes it is a romantic gesture from him. Karl calls at that moment to check to see if the singer he hired has arrived. We see a lonely Karl in his large apartment. Despite the seemingly loneliness of his life, Karl is overjoyed with Homer’s success with Marge. Marge buys the swindle, Homer is happy to go along and Karl is only as happy as Homer is.

Homer pulls off a ‘Homer Simpson’ [4] in the boardroom, resulting in a ‘promotion’ – access to the executive bathroom. And of course, the first man to bring awareness to such great news is an excited Karl (and a glum Smithers). Proudly, Karl escorts Homer through a highly regarded honor in the workplace. Homer is yet again brought to his knees by Mr. Burns’ request for a speech to the executives. However, before Karl can offer his help they are interrupted by a sleuthing Smithers – the night before he had discovered Homer’s health insurance fraud. Smithers attempts to fire Homer, but of course the angelic selflessness of Karl causes him to take the bullet. With no hesitation, Karl takes the blame for the fraud, resulting in the termination of his job. Homer is baffled by his act and yet again Karl finds a way to explain himself, leaving Homer even more baffled. As Karl says his final goodbyes to Homer at the plant exit, it is raining. As he strolls through the rain with his umbrella, Karl asks in a very polite manner, “Mr. Simpson, did you bring an umbrella”. A "D’oh" assures Karl that Homer does not have one. Perhaps, in one of the most thoughtful and beautiful things to ever happen in Springfield, Karl tosses Homer his umbrella and continues in the rain soaked.

Due to Bart’s mischief, Homer loses his hair. He returns with all confidence lost preparing for the speech. He finds a note, Karl strikes again. Karl has written the entire speech for Homer. Homer reads the letter, however it is revealed it was actually Karl in the room narrating the letter. He explains he came back to say bye to ‘the girls at the typing pool’. Homer tells Karl he cannot do the speech because of his baldness, sparking an angry and inspiring speech from Karl. Karl then kisses Homer to prove he is not a fool, and off Homer goes to face the music. Unfortunately, Homer’s speech fails, not because of the speech itself (which was brilliantly written), but Homer’s lack of hair instantly alienated the crowd.

Karl’s fate is not fully known. After being fired, he is briefly seen throughout Springfield in crowds, drawing the conclusion that he still lives and resides in his apartment. He is also seen in the “Do the Bartman” music video dancing with Jacques. Karl mentioned his mother at one stage, but she is never mentioned or seen again.

Karl was originally designed in Fierstein’s likeness. However, this design was scrapped because Fierstein thought he wasn’t a good depiction of the homosexual community. This adds to a theory that Karl is homosexual, or in the very least illustrates Fierstein believes Karl is meant to be homosexual.

Although it is never directly said, It has been suggested that Karl is homosexual. There are many indications for this theory as he kisses Homer during his pep talk and explains, "My mother taught me never to kiss a fool" before slapping Homer's buttocks. In addition, Karl was voiced by the openly gay actor Harvey Fierstein. Also, the scrapping of the original design backs this theory.

Karl was intended to return in the episode, "Three Gays of the Condo". This episode would have had Karl living and in a relationship with another man, though Fierstein declined to reappear. As a result, Karl was replaced by Grady. 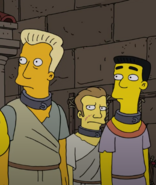