Kearney's Other Son is a son of Kearney Zzyzwicz.

He went to the small sandbox next to Moe's and he bullied Maggie, along other babies. When Homer learned of it, he tried to rescue her by pushing aside the babies, but Kearney's other son started bullying him by beating him up and putting sand in Homer's mouth. An angry Maggie then punched Kearney's other son, saving her father.

When on the beach he was crawling with a large stick in his hand towards a sand castle being built by Rod and Todd Flanders. Kearney stopped him by saying: "No son, you let 'em finish, then you smash it. There's a good boy."[1] 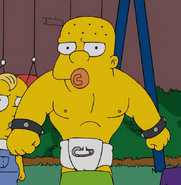 Retrieved from "https://simpsons.fandom.com/wiki/Kearney%27s_Other_Son?oldid=848613"
Community content is available under CC-BY-SA unless otherwise noted.