“First person to blink is a dead man”
―Kearney Zzyzwicz

Kearney Zzyzwicz (pronounced "jeez-wich") is one of the school bullies of Springfield Elementary, with Nelson Muntz, Dolph Starbeam and Jimbo Jones. He appears to be the ugliest and toughest of the bullies but is quite the opposite, and is very easily distracted. He is of Polish descent.

Kearney is 23 years old. He has a father named Mr. Zzyzwicz, a mother named Mrs. Zzyzwicz. Although he looks (and sounds) to be around Jimbo or Dolph's age, Kearney is actually older than that. He has custody of a child from a divorce, he is the only present Springfield Elementary School student that celebrated the United States Bicentennial (that is, was alive in 1976), regularly shaves, has been tried as an adult and was put in prison, and is old enough to drink alcohol and smoke tobacco (though he often needs a fake ID or Homer's help to get beer).

Kearney's last name (Zzyzwicz) was revealed in a computer file in season 18's "24 Minutes". Prior to that episode, Kearney's surname was never mentioned. In "Bart Gets a "Z"", Kearney can be seen sitting in the back row of Bart's classroom, implying that Kearney is a fourth grader. 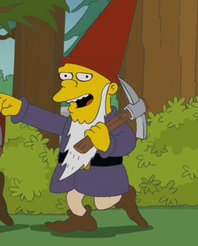 Kearney drives an old style Hyundai. This is evidenced when Principal Skinner attempts to pry off the 'H' in 'HYUNDAI' to replace the 'H' logo stolen from Superintendant Chalmers' Honda. Kearney catches him in the act, forcing Skinner to flee.

Kearney is seen smoking in the room where Bart, Nelson, Jimbo, and Dolph are trapped in, during Superintendant Chalmers's visit.

Otto once stated that he and Kearney both went to Springfield Elementary School together, only for Kearney to reply that they are unable to teach him, which is his reason for why he is still in the school despite being 23. 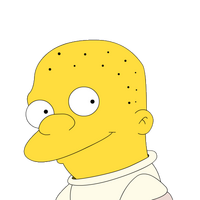 Kearney's son looks exactly like him, though younger and has a voice resembling Ralph Wiggum's. He was able to overcome his parent's divorce by sleeping in a drawer at night. He is also considered smarter than Kearney, since when he was sitting on Gil's lap when he was dressed up as Santa Claus, he believed he is the real Santa Claus and his son knew immediately he was a fake. Kearney's son seems to be a young child but Kearney says that is speaking "as a teenager and parent of a teenager" although he probably has some other child that he was talking about.

Kearney has been married to an unnamed (and unmentioned) wife. The only details given though were that he had to divorce with her, because Kearney didn't want his parents to find out. Kearney has said that he misses having sex with her, though it also mentioned in one episode that Kearney dated Jimbo's mother.

Kearney's father was shown on the season eight episode "The Homer They Fall", but in "O Brother, Where Bart Thou?", Kearney reveals that both of his parents are incarcerated and they only meet when the prison and insane asylum have their annual mixer. In Bart Simpson's Treehouse of Horror "The Immigration of the Body Snatchers". Both which he had brief appearances although the former is his most significant as he was one of the bullies' father attacking Homer in Moe's Tavern after he was trying to have their sons stop bullying his own son, Bart. He hits him with a pool stick at Homer's head, which has him stunned yet not knocked out (a condition that would have him become a boxer later in the same episode). The bullies' father then leave at gunpoint by Moe to not hit Homer if not having two drinks minimum.

Kearney's mother is not seen but is said to suffer from clinical depression, and, according to Kearney, the medication she's taking for it is making her bloated. She is either in a mental hospital or in jail.

It was revealed that Kearney, Jimbo, and Dolph were bullied by nerds. Bart then taught them that nerds are "all talk and no action" and they learned to "stand up" for themselves. Bart was later caught in the crossfire when his own creation backfired, and the other students at Springfield Elementary School (this is seen in a comic, but comic strips are not considered canonical).

Kearney becomes the Vice-Principal of Springfield Elementary (the principal is still Seymour Skinner), however none of his bullying traits are seen. He will also be Lisa's bodyguard when she becomes the USA president, saying his contract gives him three people to kill in each term.

In Holidays of Future Passed, he's a cab driver who was taking Maggie Simpson to her family when she went into labor. He decides to take Maggie to the hosptial.

Kearney was created from "Kearney Street" in Portland, Oregon, where Matt Groening grew up.

Retrieved from "https://simpsons.fandom.com/wiki/Kearney_Zzyzwicz?oldid=318941"
Community content is available under CC-BY-SA unless otherwise noted.