Kevin Michael Richardson is a voice actor. He regularly provides voices for characters since Season 21, such as the security guard in "Homer the Whopper", Burns' Cellmate in "American History X-cellent" and "Gone Boy", the Lady Gaga Express conductor in "Lisa Goes Gaga", and Jay G in "The Great Phatsby".

Since the season 32 episode, "Wad Goals", he's also the current voice of Julius Hibbert, taking over the role from Harry Shearer.

He can be heard as Cleveland Brown, Jr., Lester Krincklesac, and various other characters in The Cleveland Show (from the creator of Family Guy). He also provided the voice of Gantu from Lilo and Stitch, Joker from The Batman and Adult Whispers from Whispers: An Elephants Tale.

He is the voice of Mac Tonight in Burger Kings . 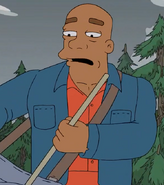 The Nigerian King in "The Princess Guide"

Phloem in "Treehouse of Horror XXIX"