King Homer is an ape version of Homer Simpson that is featured in Grampa's retelling of King Kong during a Halloween party at 742 Evergreen Terrace.

King Homer is an obvious parody of King Kong. The King Kong being parodied in the King Homer segment in "Treehouse of Horror III" is most likely the original version (made in 1933) due to the black and white scenes.

King Homer, or at least a similar character, acts as the boss of the second half of the Bartzilla level of Bart's Nightmare. Defeating him causes him to revert back to Homer and have him fall off the building, although not before humorously waving goodbye in a sheepish manner.

King Homer reappears in the couch gag of "Jazzy and the Pussycats". He grabs Marge from the couch and scaling on the Empire State Building.

King Homer is playable in the final level of The Simpsons: Night of the Living Treehouse of Horror. He can punch and do a ground pound while in midair.

The title screen of "How Munched Is That Birdie in the Window?" and "Black-eyed Please" shows King Homer climbing up the Empire State Building.

King Homer made a cameo appearance in "Wedding for Disaster" when Maggie, clearly terrified of the argument between Homer and Marge due to the latter's bridezilla attitude, imagines Homer as King Kong and Marge as Godzilla.

King Homer was created as an action figure for the World of Springfield series. He is colored as he appeared in the Treehouse of Horror, rather than the video game, so there wouldn't be any confusion.

A different version of King Homer appears in the video of the song Deep, Deep Trouble.

King Homer in "Jazzy and the Pussycats"

King Homer and Margezilla in "Wedding for Disaster"

King Homer in the title screen of "How Munched Is That Birdie in the Window?" and "Black-eyed Please"

Another ape version of Homer Simpson in the video of the song Deep, Deep Trouble 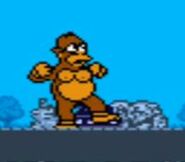 King Homer as he appears in The Simpsons: Night of the Living Treehouse of Horror

King Homer breaking through a wall 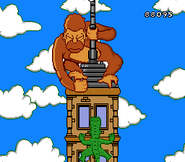