“I got a court order bringing him back. The judge said I was the most pathetic person he'd ever seen in court. Pity custody, boo-yeah! ”
―Kirk after bringing Milhouse back from Capitol City

Kirk Van Houten is the father of Milhouse, and former ex-husband as well as cousin[1] of Luann (they reconciled).

Kirk served in the U.S. Army[2] and graduated from Gudger College[3]. He worked at his father-in-law's cracker factory, 'Southern Cracker', in middle management, but when Luann left him, he was fired from the factory. According to Luann, Kirk was not a very good provider, and she had to borrow money from her sister or steal clothes from the church donation box. She also inferred that he was impotent at his managerial skills as well as utterly lacking in business sense, and that this was the reason why 'Southern Cracker' sank from Springfield's number one cracker business to a tie in sixth place with 'Table Time' and 'Allied Biscuit'. He is of Dutch and Danish descent, but favors the former.[4] He bickers with Norbert Van Houten, Milhouse's uncle, about the latter's Danish heritage.

After the divorce, Kirk was a stereotypical middle-aged male loser and deadbeat dad, suffering depression after his divorce from Luann.[5] He has been seen with one girlfriend since - Starla Starbeam, a chainsmoking alcoholic who stole his car. Luann got custody of Milhouse when they divorced, but Kirk has visitation rights. Much to his displeasure, Milhouse often addressed him as "Weekend Dad". Kirk suffers from the need to cry all the time after his divorce, even in good times. He once cut his foot off to try to get Luann back.[6] After being fired from the Cracker Factory, he struggled to hold down a job. He was once employed as an assistant to the guy who puts fliers under people's windshield wipers.[7] Kirk also had a job standing on the curb holding a sign directing people to a condo development and worked as a scarecrow protecting a soy-bean crop, which resulted in his eye being gouged by a crow. Since being fired from the cracker company, Kirk seems to be unable to maintain a steady job. He attended Leavelle's Bodyguard Academy and he was also was a singer who sold his tapes from the trunk of his car. His song was titled "Can I Borrow A Feeling" and the album featured a picture of Kirk on the front in a robe, which he was using in an attempt to be a smoking jacket. He was also unemployed at some point, surviving on alimony payments and unemployment benefits. In the episode Days of Wine and D'oh'ses, Kirk is present at Barney's A.A. meeting. The episode was aired after Kirk and Luann divorced, suggesting that Kirk became an alcoholic after the divorce.

He was once arrested for kidnapping. When Bart goes to a concert his parents banned him from, he hides at Kirk's apartment which leads to his arrest. Despite liking the attraction from the ladies outside the prison, he is released when Principal Skinner, Lisa and Alcatraaz find out Bart was lying. 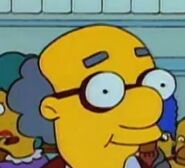 Kirk with a different haircut
Add a photo to this gallery

Retrieved from "https://simpsons.fandom.com/wiki/Kirk_Van_Houten?oldid=677655"
Community content is available under CC-BY-SA unless otherwise noted.