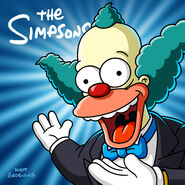 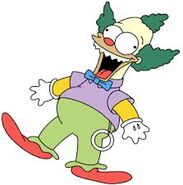 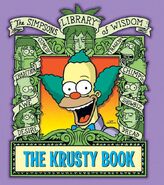 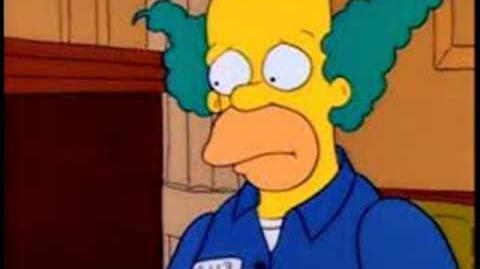 Young Krusty as a clown

Krusty after his show has been cancelled

Krusty reduced to an average citizen

Krusty learns of the horrors at Kamp Krusty

Krusty with his daughter Sophie 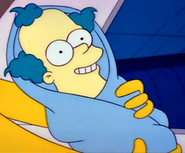 Krusty in a small clown car

Krusty in a purple suit

Krusty in a gray suit

Krusty in a lab coat

Krusty in a polo shirt

Krusty in a sweater

Krusty at the tennis court

Krusty in a bathrobe

The cast of the Krusty the Clown show

Krusty lights his cigarette with a hundred dollar bill

Krusty collecting for the Brotherhood of Jewish Clowns

Krusty fails at a comedy routine

Krusty in a mackintosh

Krusty getting a heart attack from the pork products

Krusty and his daughter Sophie at the Simpsons house, just in time for Christmas

Krusty singing along with his audience

Krusty relaxing at the Simpson house

Krusty with Olaf and Sven in his hallucination

Krusty in a bad mood

Krusty as a doctor

"And all because of one little boy who...WHO WON'T LET ME STOP!"

Krusty in the conga line

Krusty with the fast food mascots

Krusty with Bart, Lisa, and Raphael as a Klub Krusty policeman.

Krusty deleting one of his jokes on his TV

Krusty with "Do nothing" written on his teeth

Krusty in THOH XXVIII (The Exor-Sis)

Krusty in The Simpsons Guy

An older Krusty in the audience of Lisa's wedding

Krusty being hit by Homer's car

Add a photo to this gallery
Retrieved from "https://simpsons.fandom.com/wiki/Krusty_the_Clown/Gallery?oldid=913148"
Community content is available under CC-BY-SA unless otherwise noted.