Krustyland is a theme park owned by Krusty the Clown. The rides in the park were infamous for decapitating several visitors in the park, which Krusty denied, saying that the people were decapitated before they even went inside the park.

A large map of Krustyland is displayed at the queue, which lists and displays the following attractions/locations:

Krusty Land was a separate map in the game added in as part of the Krustyland Expansion released to promote the real-life park, and was required to be visited twice. The first was with "the Krusty-est Place on Earth", where the characters have to help Krusty rebuild the park due to Krusty being in massive debt. The second time was nearing the end of The End of the Beginning story arc, where Homer was forced to go to Krustyland to locate R.O.S.A.'s feather duster (as it contained the surrogate motherboard) after drawing straws with Lenny, Carl, and Moe (since it was the only place unaccounted for). After finding it, Homer says that he is gone for good with relief. It is heavily implied in the story arcs that Krusty Land was of a significant distance away from Springfield.

The Simpsons waiting in line at Krustyland. 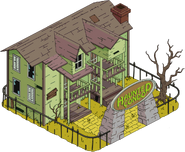 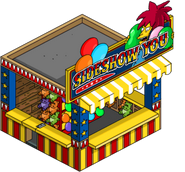 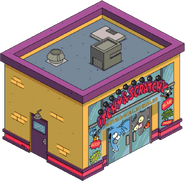