Not to be confused with the comic, Kwik-E-Bart.

The Kwik-E-Mart is a convenience store in Springfield, managed by Apu Nahasapeemapetilon. It is run mostly by Apu, but occasionally Sanjay helps out. In many future predictions, several of his kids have roles in the maintenance of the Kwik-E-Mart.

The Kwik-E-Mart isn't all that convenient of a store with Apu gouging the customers for all they have got. It sells the standard convenience store fare at extraordinarily high prices, such as milk for $12, "surprisingly expensive penny candy" or last minute Valentine's Day chocolates for $100 and including the always popular tasty frozen soft drink Squishee. One time during a holdup, Apu refused to give Homer change to call the police from the payphone. Instead, due to the store's policy of "no change without purchase", Apu directed Homer to the cheapest item in the store: a 2 oz bag of Chippos potato chips at $5.99 (to which Homer whispered shouts of "$5.99? What a ripoff! Someone should shoot you!").

The Kwik-E-Mart has also been understood to sell faulty, dirty and expired merchandise, which it is illegal to do so it if it has already expired, especially if you don't warn the customer it is as such, like Apu. It is also positively notorious for its daily robberies by Snake Jailbird, and the shoplifting exploits of Jimbo, Dolph, and Kearney frequently go on in the background should Apu be distracted.[1][2]

The Kwik-E-Mart chain was started somewhere in the Himalayas, where the world's first convenience store still stands on a mountain peak, an ironically inconvenient location. Visiting pilgrims are allowed to ask three questions of the resident all-knowing guru (except safe combinations). Apu's visit was spoiled by Homer's three questions, "Are you really the head of the Kwik-E-Mart?", "Really?" and "You?" The guru answered "yes" to all three of Homer's questions, and refused to answer any of Apu's, instead saying, "Thank you, come again." [1]

Apu was fired from his job by Kwik-E-Mart HQ after Homer Simpson contracted food poisoning from the Kwik-E-Mart's spoiled meat and failing to "blame [it] on a scapegoat or sacrificial lamb." Apu was replaced by actor James Woods who was studying to be a convenience store clerk for a role in an upcoming movie. Apu was rehired a short time later, after he foiled a robbery attempt at the Kwik-E-Mart and saved James Woods' life. Apu was shot during the attempted robbery.[1] Apu has also stated that the parent corporation of his store is "Nordine Defence Dynamics," when he is commenting on the prosecution of Marge for shoplifting.[2] Apu has been suggested as the owner of his own Kwik-E-Mart.

Apu is hailed as a cheese in the realm of Kwik-E-Mart employment for once working a shift for over ninety-six hours. During the shift he experienced a hallucination in which he thought he was a hummingbird and tried to drink nectar out of his brother Sanjay's head.[1]

In one episode, Apu installed sixteen gas pumps in the parking lot on the Kwik-E-Mart to compete with a rival store, the Gas'N'Gulp. However, a round of redirected mortar shells from Fort Springfield promptly ruined his hard work. The store itself also appeared to be destroyed: the "K" in the store's name landed on the fort grounds moments later.[3] However, a later episode showed gas pumps at the Kwik-E-Mart.[4]

The Kwik-E-Mart has not been immune to the concept of showmanship as a marketing technique. When Jasper Beardly chose to freeze himself in the store's freezers as a low budget form of preservationist for an indefinite future, Apu transformed his store into the Freak-E-Mart, of which Jasper, marketed as Frostillicus, was the main attraction. When Jasper thawed, thus ending the viability of the project, Apu chose to institute a clothing optional policy, briefly rechristening the store as the Nude-E-Mart.[5]

The Kwik-E-Mart also includes a Utopian garden on its roof; Paul and Linda McCartney often relax there. The garden is accessed through the refrigerator labeled "Non-Alcoholic Beer". When Lisa asks what Apu does when someone wants to purchase some, he replies, "You know, it's never come up." In accordance with Apu's vegetarian philosophy, all hot dogs at the Kwik-E-Mart are actually made of tofu. No customer, Apu claims, has ever noticed any difference, even though given the average Springfielder they would most likely react violently if they were told.[6]

Despite generally being a good-matured and friendly individual, Apu often exhibits a ruthless streak. He has caressed his cigarette machine in gratitude for not dispensing its products after taking a customer's money.[7] His catchphrase after a purchase is always, "Thank you, come again!" Even after dealing with Homer, who was being a difficult customer he states, "Please pay for your purchases and get out and come again!"[8]

After the city of Springfield fined Mr. Burns $3 million for illegally dumping toxic waste, a town meeting was held to discuss how to spend it. Apu suggested spending some of it on hiring more police officers, as he had been shot eight times that year and nearly missed work. Chief Wiggum responded, "Crybaby."[9] Mr. Burns, when planning his Sun Blocker plan shortly after firing Waylon Smithers, also implied that he intended to take down the Kwik-E-Mart as a rival by stamping on a model of it and saying "Take that, Convenience Mart!"

Homer first met the Griffin family at the Kwik-E-Mart when they got stranded in Springfield.[11]

According to Apu, the Kwik-E-Mart company is owned by Nordyne Defense Dynamics, its parent company.

In 2007, as an advertisement for The Simpsons Movie, selected 7-Eleven stores in the United States and one store in Canada were temporarily converted into Kwik-E-Mart stores. During the promotion, they sold Buzz Cola, Krusty-O's cereal, Simpsons donuts, Squishee cups, and other Simpsons related merchandise. 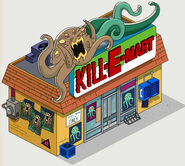 The inside of the store.

A certain family from out of town makes an unexpected visit to the Kwik-E-Mart.

Retrieved from "https://simpsons.fandom.com/wiki/Kwik-E-Mart?oldid=818522"
Community content is available under CC-BY-SA unless otherwise noted.