He was seen when Bart and Milhouse were watching his show. During the episode, an O. J. Simpson riot broke out at Kyle's school. It is unknown whether he and Stan Marsh survived the riot or not.[1]

Milhouse once dressed as him waiting at a bus stop.[2]

In the Robot Chicken Missing Sailboat couch gag, Homer asks him, Stan, Cartman and Kenny if they have the sailboat painting. They are later killed when Homer steps on them.[3]

Kyle Broflovski is one of the three main protagonists of the animated series South Park and he is voiced by the series co-creator, Matt Stone, in the original TV animated series from real world. 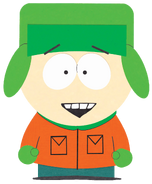 Retrieved from "https://simpsons.fandom.com/wiki/Kyle_Broflovski?oldid=910567"
Community content is available under CC-BY-SA unless otherwise noted.